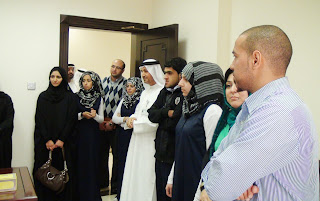 The delegation included students from SCHS's Al Amal School for the Deaf, a number of teachers, and administrators.
Mrs. Hanan Zaki displayed a videotape about the school's long journey in education, and the services it provides by specialists such as articulation therapy. The school, moreover, uses modern technology and advanced tools to teach students such as electronic blackboards. The videotape displayed the school's accomplishments regarding activities, practical projects, and sports.
H.E Tariq Sultan Bin Khadam appreciates the rapid development of SCHS who has become a pioneer institute in the field of disability. Thanks to Sheikha Jameela bint Mohammed who has given great care of all parts of the community, especially those who need special care like the disabled. 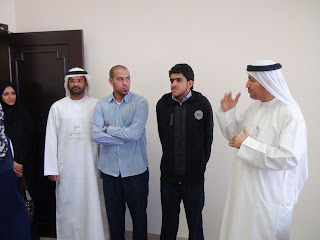 The coordination between both sides is consistent in order to provide a higher standard of life for people with disabilities. The two institutes are doing are combining their specialties to integrate people with disabilities into the public and private sectors. There is a place for those students in the Directorate's futuristic projects, plans, and employment. Arrangements will be made on public and private facilities to make them accessible and less intimidating for those who experience working for the first time.
The chairman of the Directorate of Human Resources has emphasized the quality of work that two deaf employees Asmah Fardan and Asad Hafith have accomplished stating that, “They are dedicated and hard workers. They have a great commitment to working hours, and are skilled in data processing as well as are clever.” He also appreciates the cooperation between Al Thiqa Club for the Handicapped and SCHS. The club is always open for handicapped persons to practice various sports under the supervision of club trainers and administrators. 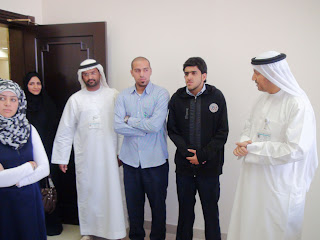 "We don't have disabled people. We only have people with great potential, energy, and capabilities. We are so proud of them and of their athletic achievements. We are proud of Mohammed Al Qaid, Thoraia Zahabi, and others who presented the flag of the United Arab Emirates in tournaments worldwide. We are excited by deaf participation in these international events" H.E Tariq Sultan Bin Khadam said.
SCHS's deaf students were very pleased by H.E Tariq Sultan Bin Khadam’s great interest in them. They hoped to find a suitable job after graduation. Mrs. Manal Abdel Latif is pleased with this warm visit. She highly appreciated the plans of the Directorate of Human Resources—United Arab Emirates—Sharjah Government. Mr. Khaled Nofal said that in comparison with other disabilities, deaf persons are special in relation to psychology and physicality. They have exceptional capabilities and extraordinary innovations that require constant motivation and support. They should be allowed in all tournaments. H.E Tariq responded to these proposals by saying: "We have never stopped supporting them. There are special programs for them in our plans and the plans for the UAE Disabled Sports Federation. Therefore, they have to commit themselves to participating in these plans." Mr. Bassem Abdel Ghafar thanked H.E Tariq who has an ambitious vision of motivation and support to people with disabilities.
To conclude the visit, the student Yousif Mohammed Abdullah presented an award to H.E Tariq who afterwards provided visitors with a tour on the different sections of the Directorate. Among SCHS's delegation were the deaf students Abdel Salam Mohammed, Yousif Swadi, and others. Sign language interpretation was provided through by Mr. Wael Sammir.

Sharjah City for Humanitarian Services (SCHS) is a non-profit organization located in the United Arab Emirates who aims at providing education, advocacy, and independence for people with disabilities under the General Directorship of Sheikha Jameela bint Mohammed Al Qasimi.

To know more about it, please visit http://www.schs.ae
Posted by ClicksandWrites at 6:50 PM