Major General Hamid Mohammed Hadidi, Head of Sharjah Police Department, is very proud to provide assistant to Sharjah City for Humanitarian Services (SCHS), a non-profit organization located in the United Arab Emirates who aims at providing education, advocacy, and independence for people with disabilities under the General Directorship of Sheikha Jameela bint Mohammed Al Qasimi.
The cooperation between Sharjah Police and SCHS is a very productive and socially relevant one.
Sharjah Police is carrying out a security program in about 21 different schools, including primary, preparatory, and high schools. At the end of the year the police department will evaluate students' performance with the hopes of improving and implementing modifications for coming events.
Sharjah Police are working hard to educate teachers on security measures, which they in turn will explain to their students. Major General Hamid appreciates the efforts of SCHS's Al Amal School wich has been an exceptional aid in providing the proper safety measures on roads. He said that Sheikh Sultan bin Mohammed Al Qasimi, Member of the Supreme Council and Ruler of of the Emirate of Sharjah, has given his orders to police forces to protect the lives of innocent people from tragic accidents. Major General Hamid thanked Sheikha Jameela bint Mohammed Al Qasimi and SCHS staff and wished them all the best.
On Tuesday, March 15th, 2011, SCHS's Al Amal School for the Deaf celebrated the 27th, Traffic Week under the theme "Together We Can Prevent Accidents". The school activated Traffic Village. 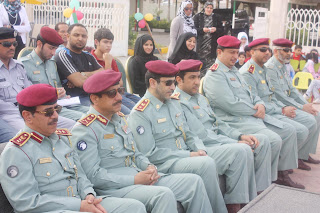 The ceremony was attended by Corporal Araf Mohammed Shamsi, Head of Sharjah Traffic & Authorization Deptarment, Major Lieutenants Ahmed Shahel and Hamad bin Dicemal, Lieutenants Jamal Bu Afrah, Rashied Hamadi, and Ali Salih, Sergeants Samirah Abdel Kareem and Bashir Abdel Kareem.
The ceremony, which was initiated by the Activities Department of Al Amal School and supervised by Manal Abdel Latif and Marym Abdel Kareem, began with the national anthem for the United Arab Emirates followed by a blessed recitation from the Holy Quran by the deaf female student Misk Ali.
Mr. Ailais Tabah, Articulation Therapist, then gave a speech in which welcomed guests. He said that SCHS has become accustomed to the Sharjah Police Department’s positive and constructive contribution to people with disabilities. "It is not strange that Sharjah Police educates the public on traffic safety measures especially, the schools of Sharjah Educational Zone which includes Al Amal School", he added. 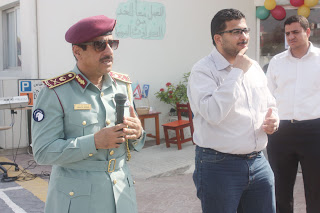 Deaf students were pleased to see Major General Hamid Mohammed Hadidi and his police officers at the school to support and celebrate with them. They thanked them for their sincere feelings. 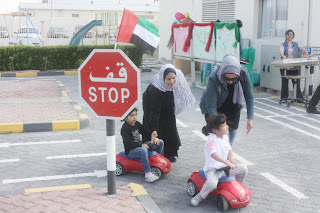 A number of acts in relation to traffic safety were performed by SCHS staff. Then, a play was displayed using dolls. Finally, Traffic Village was officially opened and students drove their mini cars according to the traffic rules which they had learned. 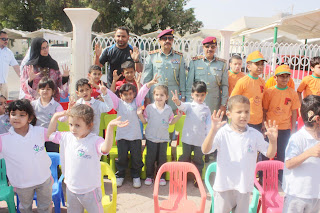 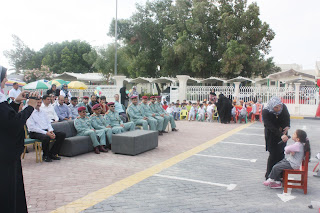 Sharjah City for Humanitarian Services (SCHS) is a non-profit organization located in the United Arab Emirates who aims at providing education, advocacy, and independence for people with disabilities under the General Directorship of Sheikha Jameela bint Mohammed Al Qasimi.
To know more about it, please visit http://http://www.schs.ae/
Posted by ClicksandWrites at 7:18 PM