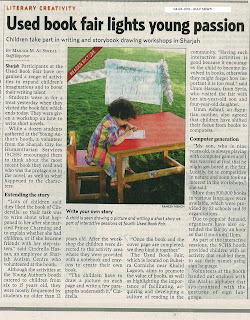 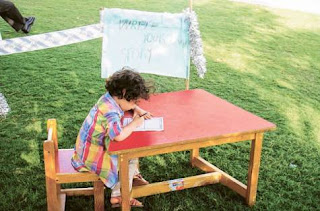 A child is seen drawing a picture and writing a short story as part of interactive sessions at fourth Used Book Fair.

Sharjah: Participants at the Used Book Fair have organised a range of activities to expand children's imaginations and to boost their writing talent.

Students were in for a treat yesterday when they visited the book fair, which ends today. They were given a workshop on how to write short novels.

While a dozen students gathered at the Young Author's booth, a volunteer from the Sharjah City for Humanitarian Services (SCHS) encouraged them to think about the most recent book they read and who was the protagonist in the novel, as well as what happened to the characters.

"Lots of children said they liked the book of Cinderella, so their task was to write about what happened to her after she married Prince Charming and to explain whether she had children, or if she became friends with her step-sisters," said Cindrella Hassan, an employee at Sharjah Autism Centre who volunteered at the booth.

Although the activities at the Young Author's booth catered to children from six to 15 years old, they were mostly frequented by students no older than 12 years old. After the workshop the children were directed to the activity area where they were provided with a notebook and crayons to create their own book.

"The children have to draw a picture on each page and write a few paragraphs underneath it," Cindrella.

"Once the book and the cover page are completed, we then bind it together."

The Used Book Fair, which is located on Buheira Corniche near Khalid Lagoon, aims to promote the value of books, as well as highlighting the importance of facilitating, acquiring and developing a culture of reading in the community. "Having such interactive activities is good because it encourages the child to become involved in books, otherwise they might forget how important it is too read," said Umm Hassan, from Syria, who visited the fair with her six-year-old son and four-year-old daughter.

Umm Ashraf, an Egyptian mother, also agreed that children have shifted their focus from books to computers.

"My son, who is nine years old, is always playing with computer games and I was worried at first that he might get bored at the fair. Luckily, he is competitive in nature and soon took an interest in the workshops," she said.

More than 500,000 books in various languages were available, which were provided by 52 schools and 53 organisations.

Due to popular demand, organisers have also extended the fair by an hour so that it runs until 11pm.

As part of the interactive sessions, the SCHS booth provided children with an activity that enabled them to say their names using sign language.

Volunteers at the booth handed out stickers with the Arabic alphabet that synchronised with the gestures of sign language.


To read it in original, please visit GULF NEWS online
Posted by ClicksandWrites at 1:27 PM