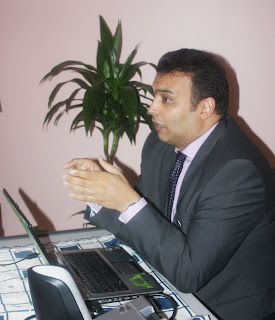 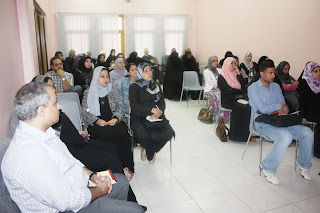 Mr. Wael Allam, Technical Director of SCHS's Early Intervention Center, a number of specialists, trainers, and parents were present. "Autism varies across the world from one out of 150 to one out of 200 children.In many countries autism statistics are fairly consistent and there's no reason to believe that the UAE is any different," Dr. Zahear said. "Autism is a disorder that affects children's social and emotional behavioral development,” he added. Autism spectrum disorder (ASD) is a range of complex neurodevelopment disorders, characterized by social impairments, communication difficulties, and restricted, repetitive, and stereotyped patterns of behavior.
The hallmark feature of ASD is impaired social interaction. A child’s primary caregivers are usually the first to notice signs of ASD. As early as infancy, a baby with ASD may be unresponsive to people or focus intently on one item to the exclusion of others for long periods of time. A child with ASD may appear to develop normally and then withdraw and become indifferent to social engagement. Children with ASD may fail to respond to their names and often avoid eye contact with other people. They have difficulty interpreting what others are thinking or feeling because they can’t understand social cues, such as tone of voice or facial expressions, and don’t watch other people’s faces for clues about appropriate behavior. They lack empathy. Many children with ASD engage in repetitive movements such as rocking and twirling, or in self-abusive behavior such as biting or head-banging. They also tend to start speaking later than other children and may refer to themselves by name instead of “I” or “me.” Children with ASD don’t know how to play interactively with other children. Some speak in a sing-song voice about a narrow range of favorite topics, with little regard for the interests of the person to whom they are speaking.
Scientists aren’t certain about what causes ASD, but it’s likely that both genetics and environment play a role. Researchers have identified a number of genes associated with the disorder. Studies of people with ASD have found irregularities in several regions of the brain. Other studies suggest that people with ASD have abnormal levels of serotonin or other neurotransmitters in the brain. These abnormalities suggest that ASD could result from the disruption of normal brain development early in fetal development caused by defects in genes that control brain growth and that regulate how brain cells communicate with each other, possibly due to the influence of environmental factors on gene function. There is no cure for ASD. Therapies and behavioral interventions are designed to remedy specific symptoms and can bring about substantial improvement. The ideal treatment plan coordinates therapies and interventions that meet the specific needs of individual children. Most health care professionals agree that the earlier the intervention, the better. Therapists use highly structured and intensive skill-oriented training sessions to help children develop social and language skills, such as Applied Behavioral Analysis. Family counseling for the parents and siblings of children with ASD often helps families cope with the particular challenges of living with a child with ASD.
Mrs. Ebeer Ahmed, a member in SCHS's Early Intervention Center Lectures & Workshops Committee, confirmed that her team has distributed a questionnaire on parents to find out what topics that require more lectures. Most of the answers were ASD. Thus, the team contacted Dr. Zahear Dean, who responded to this invitation quickly.
To conclude the lecture, Mr. Wael Allam, Technical Director of SCHS's Early Intervention Center, thanked the lecturer for providing such useful information and his willingness to answer the audience’s questions. 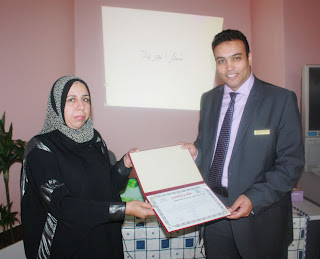 In addition, Mrs. Maha Jamal, Head of Training Programs at SCHS's, presented an award to the lecturer and wished him the best of luck.
Sharjah City for Humanitarian Services (SCHS) is a non-profit organization located in the United Arab Emirates who aims at providing education, advocacy, and independence for people with disabilities under the General Directorship of Sheikha Jameela bint Mohammed Al Qasimi.
To know more about it, please visit http://www.schs.ae/
Posted by ClicksandWrites at 6:30 PM