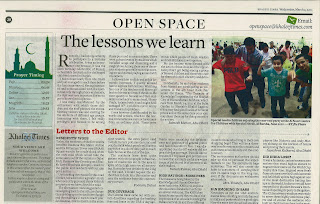 
Recently, I had an opportunity to participate in a birthday celebration. It was an important one because, it was the sixth birthday celebration of Manzil, a charitable institution for challenged children located in Sharjah.
I had to travel early from Abu Dhabi and just managed to reach there before the functions started. Having interacted and communicated with the institution only through phone and emails, the visit was very important for me to get to know them in person.
I was really overwhelmed by the enthusiasm with which those children and the staff planned the events. Meeting visitors was also exciting for the students of different age groups. Interacting with them, I felt really privileged and blessed to be among those pure and innocent minds. There were cultural events by students which included songs and drumming and a magic show. Among them one of the senior students got really excited at meeting me and started playing around with my camera.
I allowed him to click and as his demands increased, I quietly allowed him to explore its functions. Watching him one of the teachers told him to go back to his seat and watch the show. He went quietly to his seat and then suddenly came back to me and said, “Sorry Uncle, I played with it and might have damaged it.” I told him not to worry and it was not a problem.
I was however dumbfounded by his words and actions, which in the normal circumstances may not have come from an ordinary child. These were words which people of much wisdom and mobility have now forgotten.
My day became more blessed with the action of that child and the opportunity that I got being among a group of blessed children and those who care for them with such sincerity and devotion.
Incidentally, he and other students from Manzil are participating as volunteers in the 4th Used Book Fair under the theme, “The Treasure of Knowledge.” organised by the Sharjah City of Humanitarian Services, which runs from March 1-4, 2011 at the Palm Garden in Sharjah’s Khalid Lagoon. ßYou may find good books at nominal prices and at the same time your visit may cheer them up for doing more for the society.
To read it in original, Please visit KHALEEJ TIMES online.
Posted by ClicksandWrites at 8:23 AM