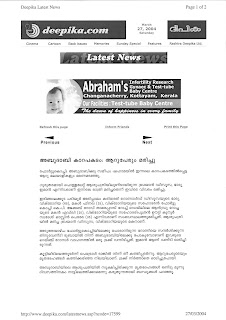 I was not very much bothered about safety till a few years ago. It was in March 2007 that I started keeping a more serious look at road safety. On 26th March 2004, my mathematics teacher from school and her family members, six of them perished in a car accident here in Abu Dhabi. The new Corniche road, i.e. the Eastern Corniche road was being built and the road work was progressing swiftly during those days. Every day, the road directions and route changed, sometimes widening and some narrowing at various stretches. Mrs. D’Souza and family were on a visit to Abu Dhabi from Dubai and it was at one such stretch, a speeding driver drove past their vehicle hitting it. The vehicle was driven by her daughter in law. It was a brand new Land Rover car and they were all coming to Abu Dhabi to meet relatives after purchasing it. She lost control and hit the dividers on the side and the vehicle caught fire instantly. Incidentally, the tank was full and the doors got jammed and they were unable to come out or even rescued by those who approached after the collision.

It was a tragedy, which I can never forget. Mrs. Victoria D’souza was with us in Don Bosco High School and then she moved over here and was working as a Supervisor in one of the schools in Dubai. Her children were known to me from childhood and this was one incident very difficult to forget.

After this, I have always raised my concern over road safety and dangerous driving issues. It is a tribute to them. May their souls rest in peace.