For the benefit of those who are visiting Sabarimala this season- if possible, please avoid Swami Ayyapan Road if it is raining

For the benefit of those who are visiting Sabarimala this season- if possible, please avoid Swami Ayyapan road if it is raining

During a short visit to Kerala, utilising the UAE National Holidays, I had the privilege to visit Sabarimala Temple for a quick darshan. I used to visit the temple every year till 1995 and it was after a long gap, I was able to make a trip to this very important temple and have darshan of Swami Ayyappa. Although, I used to take the 41 days religious rituals during this season, somehow or other visiting the temple eluded from me till this year, which I used to diligent perform from a very small age till the visit in '95. It was all sudden and as it turned out, and as those who came along with me and all others who were present there conveyed, it was a call on duty with a divine purpose. 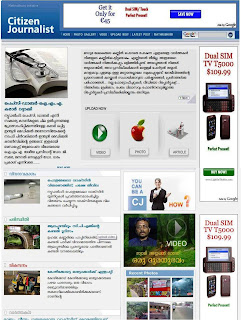 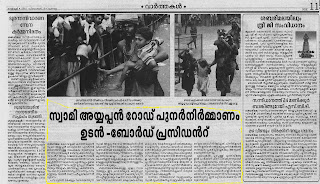 ﻿During a short visit to Kerala, utilising the UAE National Holidays, I had the privilege to visit Sabarimala Temple for a quick darshan. I used to visit the temple every year till 1995 and it was after a long gap, I was able to make a trip to this very important temple and have darshan of Swami Ayyappa. Although, I used to take the 41 days religious rituals during this season, somehow or other visiting the temple eluded from me till this year. It was all sudden and as it turned out, and as those who came along with me and all others who were there mentioned that this unplanned visit, especially the descend from sannidhanam to pampa was planned by Swami Ayyappa. The road was extremely dangerous, and since I was not in touch with anyone with regards to the conditions prevailing, and also the fact that there was a kanni ayyappa (who was visiting sabarimala for the first time), I opted to take Swami Ayyappan road, to show the way. As we moved down, it was like, one of the dangerous steps I took in my life. The person who was along with me was aged and found the slippery road too difficult. To add to our woes, there were continuous stream of heavily loaded tractors driving upwards to sannidhanam along with donkeys loaded with goods, and dolly (manual carts in which elderly or physically challenged are carried on shoulders to sannidhanam). The rush upwards was heavy on that day and then the police personnel diverted all those who were coming down to use this road making it really busy.
Everyone who used this road, used the same path and as we moved on, it became more and more difficult and the steep descend for us were equally or more steep for the fully loaded tractors. Any moment a devotee or a donkey cross in front of these tractors, these drivers were left with no option to control the vehicle and hold it without coming down. The wheels rotating and the muddy road with intermittent rain, made it skid and move towards the pilgrims, and all those behind it.
After seeing two such occasions, I couldn’t resist myself from highlighting this issue, as I found no police personnel, no ayyappa seva sangam volunteers or any other helping hands to rescue or direct those affected from this dangerous situations.

The following self explanatory pictures are added with brief narrations for the benefit of better understanding the situation I witnessed.

Rush of pilgrims on that day at Sabarimala 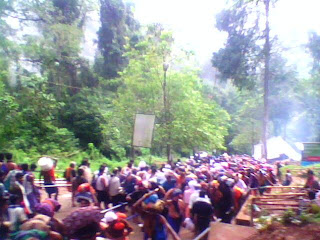 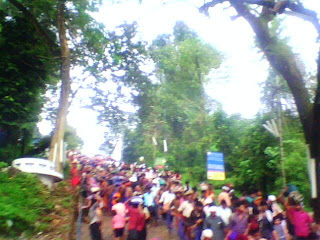 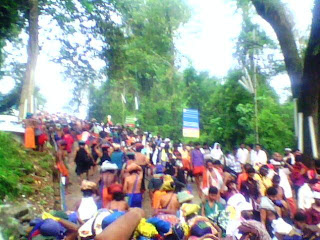 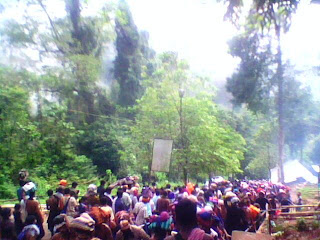 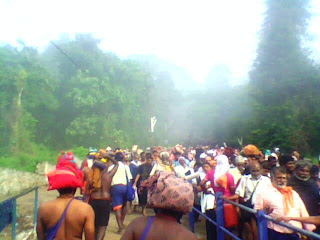 Swami Ayyappan Road - pilgrims descending down to Pampa rush towards any available space as they listen to the sound of horns of the arriving tractor. The space is just enough for a tractor, with loads on both side to pass, with difficulty. 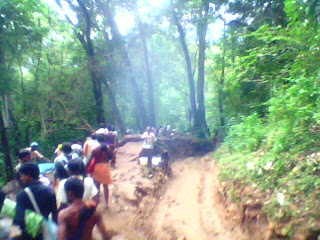 You may ﻿see those workers carrying heavy load on their head also resorting to climb upstairs, either wait or continue walk till the tractor pass by. 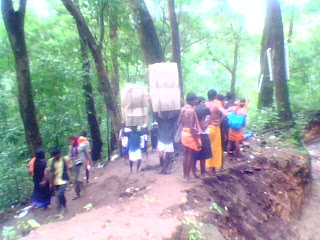 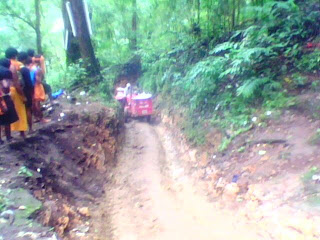 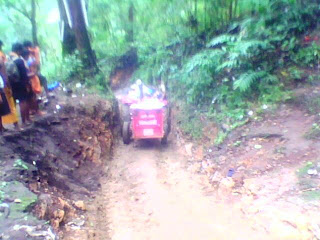 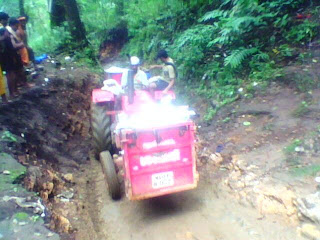 And here descends a tractor. If you notice, the driver is standing, may be literally on the breaks to control the vehicle to a stop, on the slippery conditions. 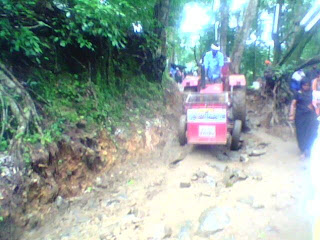 This poor driver had to apply break at the corner, eventhough he had continuously alerted those coming down with whistle and horn, someone ran in front and had to apply the break. For nearly 15 minutes, for all those watching from the side and upstairs, it was life and death situation for the driver and for all those behind, as he had absolutely no control on the vehicle as it continued to come down. 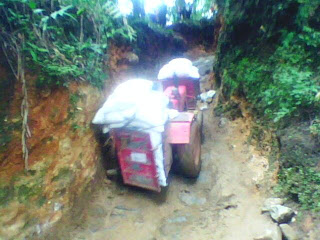 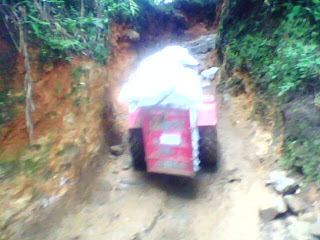 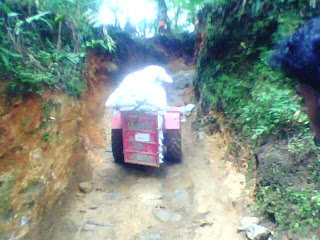 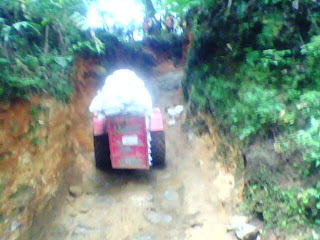 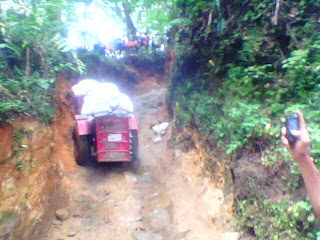 Left with few contact numbers that came to my mind, I called up Amrita TV team in UAE, who in turn informed the reporters stationed at Sabarimala and captured the scene. Calls to Mathrubhumi helped me to get the direct number of Kerala Chief Minister Sri V S Achuthanandan and his Personal Assistant , after listening to me from the location, requested me to appraise the situation to the Devaswom Minister. A call to his office and talk with his Personal Assistant, I was assured, necessary measures will be taken with immediate effect.
Upon return, I thought of highlighting it further and a timely video news coverage on Amrita TV channel and a Community Journalism Video report in Mathrubhumi online and a few emails to concerned authorities have made sure that the road conditions prevailing at Swami Ayyappan road will be improved for the benefit of devotees visiting Sabarimala this season and in future.
I thank all concerned especially Amrita TV team at Abu Dhabi and Sannidhanam and Mathrubhumi Online team for timely assistance and willingness shown to highlight this problem with importance.
As satisfying it may be for a person who value the safety of those around and also from a Non-Resident Indian working in the gulf who rarely get to see heavy rain, it started raining heavily as we drove away from Pampa. I enjoyed the rain, heavy rain, and all along was thinking of the thousands of devotees who were either climbing up or down, or stationed at Sannidhanam and Pampa.


With this community report, I kindly request those who read to circulate it amongst those who benefit from it on the dangers of using this road, when it is raining, and till the time the authorities define appropriate safety measures, for the tractor drivers, the dolly operators, the donkey operators and the poor animals and of course thousands of pilgrims visiting Sabarimala this season.


- request the authorities to kindly install necessary sign boards informing devotees not to rush and run down on the slopes as it is dangerous for them as well as those elderly or children who may be on their way.


- request the authorities to kindly place necessary police and ayyappa seva sangam volunteers on Swami Ayyappan Road to control the smooth passage of devotees and load carrying vehicles or animals till the time appropriate measures are in place for improved safety.


- request the authorities to kindly install ropes or other type of support system for devotees to hold and grip while they descend, especially on the numerous shortcuts which are extremely dangerous, and deceptive.


- although a repeat, I humbly request all young and regular devotees to patiently descend without rushing, as it is extremely dangerous for all those who use the same road for journey up and down.

More to be done and my personal efforts in this will be continued in this direction in the near future.
Ramesh Menon,
Abu Dhabi
12.12.2010 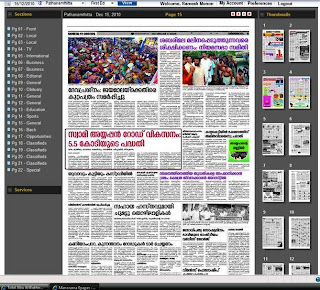 The above is the print screen shot of a news reported in Manorama Newspaper online and print dated 15.12.2010.  Kerala Government have now approved a 5.5 crore budget to increase the width of the road from present 3.5m to 5 mts and build a wall on the dangerous edges enroute this road. There are plans to have additional or sufficient path for walking. It will be a concrete road. Since any expenditure above 10 lakhs needs special permission from an ombudsman and his approval is required, the proposal will be submitted to him shortly by the concerned authorities. I sincerely hope this will be approved and the road work will get done before the next Sabarimala Season.

Posted by ClicksandWrites at 4:30 PM