Your future at their hand 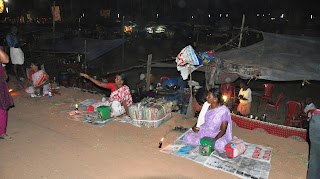 This site brought out the memories of my childhood when as children, used to roam around freely during the festival times. Out of curiosity and interest to know more about these experts, I sat in front of one of them…My father, and my wife, amusingly watched me, as they very well know my intentions, and know that, there is no point they could stop me. They stood a safe distance away, but clearly they could hear my conversation.

As I sat in front of them, she started saying… oh… you just completed your studies with good marks. You will get a good government job.. I wanted to know more, where it will be, it will be abroad, sure. Oh, ok.. and then, before I stopped, she continued… you will get married with a beautiful girl…

I glanced at my wife, as I winked to her….smilingly…I couldn’t resist laughing, and told her… chechi(sister), I am already employed, married and have my son, who is in college….

Hiding her embarrassment but gutsy as ever, she  was as cool as she had collected the fees in advance itself. Sir, sometimes these parrots, bring wrong cards, and we have a set answers for each cards. Also, we look at the customer in front. You never looked like a married man with a grown up child… A job abroad and marriage, those are the only two things important for the youth now. This is our livelihood.

As I enquired further, she said, we move on from one festival place to another.. Some times we hit bulls eye, which make our customers happy, but some times not. We just give only a vague picture only sir. From a coastal village in the northern part of Kerala, they have a team leader, who identify prospective venues and move them from place to place. After the festival season gets over, they go back to fishing or coir factory jobs….I said  thanks to her and gave an additional note as token of my appreciation for being open with me to know more about them.

Can we or someone else predict what is in store for us ahead? Of course, we can mould it as it happens in our own way and suitable style and convenience. However, there is something super natural and it is the grace and blessings that is really important to have our journey ahead smooth.