Dhanushkodi - reminiscence of a church destroyed during cyclone of 1964 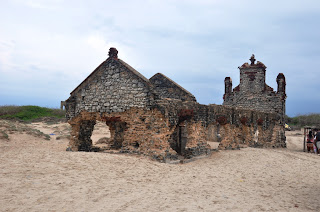 A photo taken at Dhanushkodi, taken on 23rd October, showing reminiscence of a church which was destroyed during the cyclone of 1964. The devastating 1964 cyclone regarded as one of Asia's fiercest cyclone of 20th century destroyed the village Dhanushkodi on Rameswaram Island. The place can only reached by foot or with a 4WD vehicle. Sri Lanka is about 31 kms away from this tip which joins Indian Ocean and Bay of Bengal.
Posted by ClicksandWrites at 12:21 AM