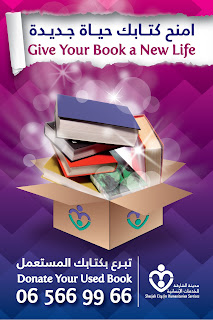 Her Highness Sheikha Jameela bint Mohammad Al Qasimi, Vice President of the Supreme Council for Family Affairs in Sharjah, Director General of SCHS, and Head of Organizing Committee, gave her orders to evaluate the previous circulations of the Used Books Fair, study its advantages and disadvantages to set plans to improve and increase its organization.
Sheikha Jameela bint Mohammad Al Qasimi confirmed that organizing the book fair corresponds to the cultural approach founded by His Highness Sheikh Dr. Sultan Bin Mohammad Al Qasimi, member of the Supreme Council of the United Arab Emirates and Ruler of Sharjah, who believes that books plant noble values and raise awareness and knowledge of people which will have positive implications for the entire society.
SCHS is preparing to organize the 5th Used Books Fair from February 26th to March 1st 2013.
In October 2012 the fair’s various committees met twice to discuss, evaluate, and prepare for the event.
Committees include Preparations Committee chaired by Mr. Jihad Abdel Qader, Attracting Public Schools Committee chaired by Mrs. Mona Abdel Kareem, Attracting Private Schools and Universities Committee chaired by Mr. Mohammad Faouzi, Media Committee chaired by Mr. Osama Mardini, Attracting Charities and Nonprofit Organizations Committee chaired by Mrs. Khadeja Bamakhramah, Secretariat Committee chaired by Mrs. MarymRaisy and Finance Committee chaired by Mr. Ezzat Alonchasa.
In the two meetings, previous festivals were discussed thoroughly to determine weaknesses and strengths.  Committees will try to improve its weaknesses and enhance strengths according to a questionnaire given to participants to scan their opinions of many aspects such as organization, services, and contributions.
The Used Books Fair is a project with enormous humanitarian, cultural, and noble values that corresponds to Sharjah’s educational and cultural priorities.  It raises awareness of disability issues in UAE and countries that are nearby.  It endorses the concept of volunteerism in the minds of younth, students, and community members and provides SCHS with a modest income.
Mr. Jihad Abdel Qader stated the stage of collecting books includes several activities such as a promotional campaign under the theme “Give your Book a New Life” which encourages people to contribute.
If someone wants to donate their used books, they can call SCHS at 06 5669966 and give their donations.
The campaign aims at collecting – non text book— books of different languages; reminding the community of the connection between the event and SCHS and giving a chance to those who want to support SCHS. As well as telling the general public about SCHS’smission and values.
The promotional campaign will include the seven Emirates.
SCHS is a leading institute in organizing such events which promote the habit of reading to increase people’s knowledge and expand their horizons.
Mr. Osama Mardini believes the Used Books Fair enriches the cultural and social mentality of the general public by spreading the culture of volunteerism through an activity that is based on volunteers from schools, universities, and charities.
He then mentions the historical background of the fair which began in 2006, than in 2007, after that in 2009, and the last one in 2011.  These four circulations were organized in collaboration with sponsors and SCHS’s partners.
The 2011 festival was extraordinary.  It had a large number of volunteers, contributing organizations, and attendance.  The number of visitors had reached 40,000, while the books exhibited had reached over 500,000.  Books were displayed in over 120 tents.  The number of volunteers reached 500 mostly students from schools and universities in addition to individuals from charities and non-profit organizations.  The number of participating public schools reached 20, private schools 22, and 2 universities.  The number of charities, nonprofit organizations, and diplomatic missions reached 47.  Sales were 500,000 AED which was used to support the services and programs which SCHS provides to people with disabilities.  Hopes for this year event are high.

Posted by ClicksandWrites at 11:02 PM