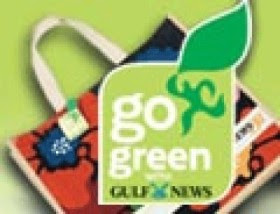 Dubai: The "Go Green" campaign has earned Gulf News a prestigious award for its coverage of environmental pollution, events and initiatives in the UAE.

The Outstanding Environmental Publication award will be presented to Gulf News next week as part of the Environment, Health and Safety Awards 2008 organised by the Ports, Customs and Freezone.

The newspaper has been recognised for its continuous efforts to create awareness about environmental issues. It carried articles on the environment and engaged in public outreach and dialogue with readers.

Gulf News Editor-in- Chief Abdul Hamid Ahmad said the award was appreciated and environmental issues here and internationally will continue to be reported on.

Gulf News initiated the "Go Green" campaign on the heels of its "Say No To Plastic Bag" drive, which supported the reduction in use of plastic in daily life.

During eight months of awareness-building within the community, jute bags were distributed to its readers.
http://www.gulfnews.com/nation/Environment/10273115.html
Congratulations GULF NEWS
Posted by ClicksandWrites at 7:29 AM

Email ThisBlogThis!Share to TwitterShare to FacebookShare to Pinterest
Labels: HSE