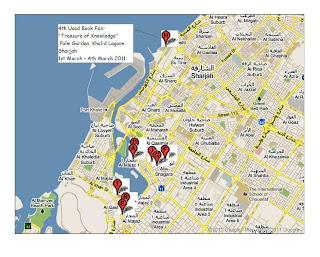 
THE Sharjah City for Humanitarian Services (SCHS) has finalised the preparations for the 4th Used Book Fair under the theme, “The Treasure of Knowledge.”

A meeting was held recently at the Supreme Family Council headquarters, which was attended by representatives of stakeholders, who discussed various aspects of the fair.

The event will be held between March 1 to 4 at the Palm Garden in Sharjah’s Khalid Lagoon.

A number of schools, universities and individuals will take part to support the SCHS.

Abdul Karim, one of the co-ordinators said that the condition for the collection of books for the fair will be wide enough to cover all aspects of literature and those who participate and offer over 20 books as donation for the fair will receive a certificate from the SCHS. The prices of books will range from Dhs5 to Dhs20.

He said that the SCHS, which is main organisor of the event, will provide facilities to those who wish to install their stall, including tents, tables, chairs and banners bearing the name of each participating organisation.

The last date for setting up a stall is Feb.28.

Mona Abdel Karim and Mohammad Fawzi have asked private schools and universities to take place in the humanitarian event, which aims at providing funds for the promote education and integration of people with disabilities.

Ahmed Shaheen Al Hosani, who is one of the co-ordinators, discussed the preparations for the book fair.

However, Fawzi presented a comprehensive definition of the fair to target both public and private schools, universities and non-profit organisations.

The officials said that SCHS wants to promote the importance of volunteerism by all members of society.

Mona Abdel Karim said that students with intellectual disabilities would be participating as volunteers.

To read it in original, please visit, GULF TODAY online.
Posted by ClicksandWrites at 11:26 AM