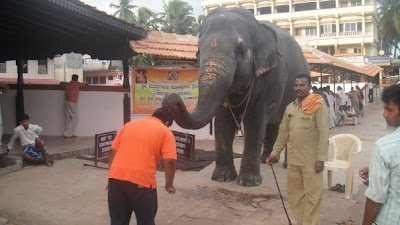 During our recent summer holidays, we had an interesting tour of South India by road. Kollur Mookambika temple and Uduppi Sri Krishna temple were two destinations amongst it.

On reaching Uduppi temple, we noticed that the temple was undergoing renovation works and hence I was unable to capture its beauty through my camera lenses. A look around suddenly attracted our attention to a beautiful temple elephant stationed next to the entrance, along with it’s mahout, a neatly dressed guy. It was an unusual site – a well dressed mahout.

A welcome change – and we also noticed that the elephant was blessing devoties with it trunk. My mother-in-law got excited and she wanted my son to get blessed. She wanted a picture taken too. I took my son near the elephant and asked the mahout in hindi, what should we do to get its blessing? He said, offer some dakshina in its trunk, and it will bless him. No dakshina no blessing. I said, no problems but I wanted to take a picture… He said, taking picture is not a problem, but make sure, the flash is off, but he was still reluctant seeing a professional camera in my hand. He said, better you not take any picture…

Murmuring in Malayalam, expressing my disappointment in a tone similar to – how many elephants we have in Trichur and how many elephant we have taken photos there, it is the first time, someone is saying like this… We don’t want a blessing like this… I walked back with my son. Suddenly, a call came from behind, chetta… no problems, you are a malayali, you can take photo.. I was surprised, because, he doesn’t look like a malayali at all. I went near to him, asked him, where he was from. He said, he was from nearby Guruvayoor, and his name Madhu. The elephant’s name is Sharadha. More talk, and he enquired about my whereabouts and when told that I was from Irinjalakuda, he told me that, he has once, worked as the mahout of the elephant who killed three devotees last year during Irinjalakuda Koodalmanikyam temple festival. He told me, how nice an animal it was, and sure that someone might have really provoked him to have done such a cruel and sad thing.

We became friends, and I handed a comparatively bigger note in my sons hand, to give to the elephant to get himself blessed. Positioned myself, as soon as he showed his little hand with the dakshina, the elephant stretched its trunk, collected the money, and in a flash, it swung it’s trunk to the hand of the mahout Madhu stationed close by and then reversed it and placed it on my sons head and retrieved. It all happened in a flash. I couldn’t get the shot clearly. Thought, ok, the mahout is a malayali, let him get some money from us, and gave again another note in my sons hand.. This time too, all actions happened in a flash.. No, myself and my family was not happy.

We requested once more to my son to undergo this blessing sequel to be repeated for an album shot. Suddenly, he expressed, his anger… Papa, you try now…. It’s trunk is very heavy, my head is aching… We realized, how serious and heavy it is and laughed a lot…

It pointed us to a reality. Hoow dangerous is it to get knocked down by an elephant in anger!.

He obliged finally, and we gave one more note to our friends Madhu and Sharada. Blessed more than once, my son wanted to leave soon too. Luckily, I was able to capture it nicely the third time.

Madhu, seems to be enjoying his royal duty with Uduppi devasthanam. As do Sharada. We wished them good luck and moved on to our next destinations, that was Kukke Subramaniam temple… There was more fun waiting for us… Share it with you next time.
Posted by ClicksandWrites at 3:31 PM