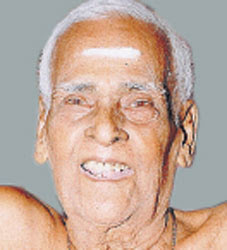 He was 85. The cremation will be held on the premises of his house at Thaloor on Wednesday at 10 am. He is survived by wife Vishalakshmi Marasyar, sons Unnikrishnan, Ramkumar, Satheeshan and Prakashan and daughter Lathika.

Well-known as a resourceful thayambaka expert, Appu Marar was known as an expert in sopana sangeetham and thimila.

He learned the melam preliminaries from his father Narayana Marar and later from melam acharyan Anthikkad Ramankutty Marar.

At the age of 14 he had the `arengettam’ at Anthikkad Karthyayani Temple. At the age of 35, he led the prestigious panchari melam of Peruvanam Chathakudam Shastha and earned the rare title of ‘melapramani’. In the subsequent years, Appu Marar had the ‘pramanam’ for all the famous Pooram celebrations, including the famous Thrissur Pooram and Arattupuzha Pooram. Appu Marar had developed his own style known as ‘Chakkamkulam style’.

He is the recipient of the first Pallavoor Appu Marar Puraskaram of the Kerala Government. Appu Marar earned the titles of Mela Kalathilakam, Mela Kalaratnam, Mela Kalacharyan, Melacharyan and Kalacharya. He is also the recipient of the Kerala Sangeetha Nataka Akademi Award Veera Shringhala from Mumbai Keli organisation.
Posted by ClicksandWrites at 3:16 PM