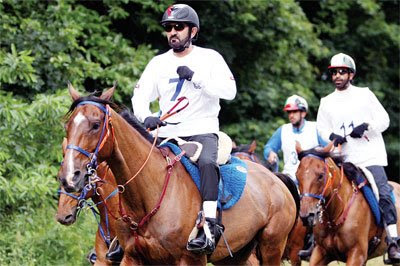 DUBAI - His Highness Shaikh Mohammed bin Rashid Al Maktoum, Vice-President and Prime Minister of the UAE and Ruler of Dubai, led the UAE riders to their first seasonal European endurance title in Britain.

The race comes as part of the preparations of the national team for the World Championship scheduled to be held in Malaysia during the month of November.

Riders from France, Britain, Australia and the UAE took part in the competition which extended over 120 kilometres in relatively favourable weather conditions. 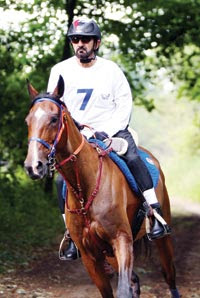 The three-member squad joined hands before they crossed the finish line ahead of the others.

Shaikh Rashid Dalmook bin Jumaa Al Maktoum and Abdullah Saeed were the other two members of the winning team.

According to the race reports, Shaikh Mohammed showed the way right from the start, followed by Shaikh Rashid Dalmook in the first 36km loop which they covered in 1:55:11 seconds at an average speed of 19,07/hr.

Shaikh Mohammed continued to set the pace in the second and third stages before the UAE riders dominated the field and went clear to cross the finish line in 3:31:28 seconds.

Sultan bin Sulayem was crowned champion of the 160km endurance ride which was held in the same venue.

Shaikh Majid bin Mohammed who started as hot favourite to win the ride, pulled out after the third loop to protect his horse.

The UAE rider and trainer Mubarak bin Shafiya said they were quite satisfied with the strong performance of the UAE riders.

Saeed Al Tayer, vice-chairman of the Dubai Equestrian Club said it was great to see the UAE riders winning two races at the same time in one day.

"UAE riders are the true champions of the world," he said
Posted by ClicksandWrites at 7:09 AM

Email ThisBlogThis!Share to TwitterShare to FacebookShare to Pinterest
Labels: Sports +