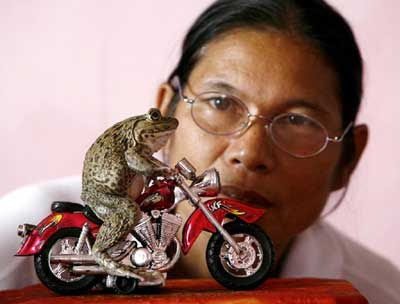 Tongsai Bumroongtai, 52, looks on her pet black spotted female frog ‘Nong Oui’ as it sits astride a toy motorbike in the resort city of Pattaya, Chonburi province, Thailand, on February 10, 2008. Tongsai found the amphibian eleven months ago and trained her pet frog, ‘Nong Oui’ to sits on toy motorbike, a battery-operated dumper truck and lies on a plastic bottle in various positions for show and claiming she could speak to the frog.
Posted by ClicksandWrites at 8:20 AM