Volcano Fountain - a humble call to bring it back 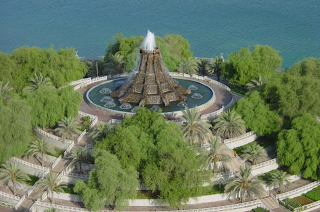 Any expat or Emirati family who was here before it was demolished in 2004 remembers the 80 foot fountain right by the Gulf. It was common to see families relaxing while the kids ran around the fountain or friends met to catch up. For many years, the Volcano Fountain which got the name from its cone – like shape and the electric lights that looked like lava at night was the place for National Day festivities and other traditional events, a part of the heritage and culture and a prime spot for visitors to the UAE. However, it was removed during the expansion of the Corniche and so far has not found a place in the new scheme of developments in the capital.
Many in Abu Dhabi especially those who grew up seeing the fountain miss it. But one man has decided to take the initiative to bring this beautiful fountain back. Ramesh Menon, an Indian who works in the capital, has sent a petition to the authorities in Abu Dhabi asking them to find the right place to restore this grand monument to the city. “This will make a differenced in Abu Dhabi; it will keep a lot of memories alive and attract various people. There are many who have taken interest and joined in this petition. As lovers of this country, tradition, and historical growth, we all want the Volcano Fountain to be restored, rebuilt anywhere in the new Corniche or any other befitting place in Abu Dhabi, says Menon. “How can we forget that Abu Dhabi was synonymous with this fountain until 2004, and now it’s gone,” Menon reminds us who has been in the city for decades.
A committee is currently looking into the situation, and Menon is working to spread the message and gain more support to ensure that his mission succeeds.
http://tempoplanet.com/making-a-difference-4/
Posted by ClicksandWrites at 12:14 AM