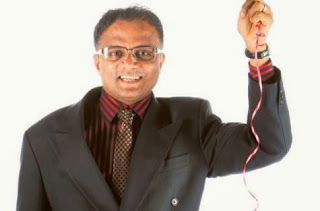 Dubai: It is quite striking as to what extent a reader’s devotion can reach. Speaking to Ramesh Menon, 46, we get to know that there is no limit. He has followed Gulf News since his first day of arriving in the UAE 24 years ago.
When asked about his journey with the paper, the Indian national said: “At the time when I first arrived in the UAE in 1989, there were limited sources for quality news, and that is when I developed my keen interest in Gulf News, as it was the only paper at the time that would deliver quality and reliable news.”
Upon his arrival, Menon first stayed in Abu Dhabi, then moved to Dubai and later Sharjah, before moving back to Abu Dhabi in 2000, and that is where he has been based for the past 13 years.
Over all these changes, one of the factors that have been consistent in his life isGulf News. And he charted the changes in the paper keenly.
He said: “The breakthrough came when each section [of the newspaper] got separated, which added consistency to the paper as it made it easier for readers to pull out that particular section, which he or she is interested in. Although I always read the whole paper, I find this very convenient as I can choose the news I want to read first.”
He is a determined reader with great enthusiasm for news, and he does not settle for anything less than perfection, which is evident in his constant interactivity with the newspaper’s Readers Desk. He said: “Most of the staff know me by now, as I am constantly interacting with their work by giving them my suggestions.”
Menon got married in 1991 and became a father in 1992. His second child was born in 1995. His two sons are now pursuing undergraduate studies in engineering and management. While he is based in Abu Dhabi, where he works as a technical officer for an oil company, his wife and elder son are currently living in India, while his younger son is studying in the UK.
Marking the 35th anniversary of Gulf News, Menon said that the key reason for the newspaper’s success is that “it is a reader interactive newspaper. This is evident in the community reports, which is the voice of the reader on certain issues that need to be highlighted. Facebook and Twitter are constantly being updated and this is a great opportunity for the reader to follow up and get instant news as well as to interact with the paper.”
His daily routine includes reading the printed edition of paper in the morning and then moving on to online updates on gulfnews.com during the day. He finds the online version very helpful, especially when travelling but also for being prepared as to what will be in the news the coming day.
The very reason he started reading the newspaper in the first place, as a 22-year-old, when he initially came to the UAE in 1989. He said: “Gulf News is a beautiful paper, I absolutely love the newspaper, and it will always be my number one source of news.” 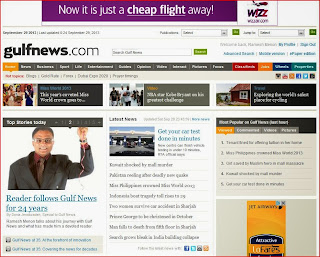 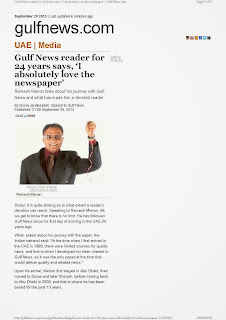 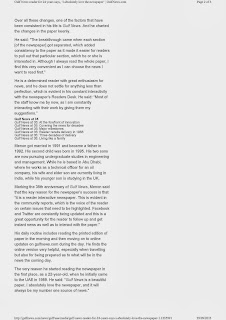 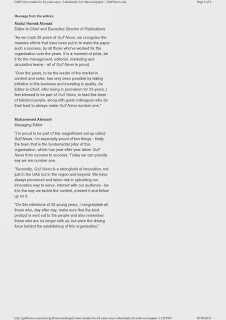 To read it in original, please visit Gulf News online

Posted by ClicksandWrites at 7:55 AM

Email ThisBlogThis!Share to TwitterShare to FacebookShare to Pinterest
Labels: 02 Gulf News, 02 Letters to the Editor, 02 Opinion 2013