DURING the later part of the ‘90s, I used to have a good friend here. He was a sound engineer and a good RJ working for a radio station that time. Due to his passion for music and arts, we became good friends.

It happened that due to some wrong relationships and moves in life and due to job loss, he had a disastrous end of residency in UAE and left to India for good.

I lost touch with him. It was after almost seven years, I got a call from him and he talked a lot about his life now and then and in between. He was still in love with Dubai and the life and friends and connections he had and was finding it difficult to overcome his huge losses and betrayals. We continued to keep in touch once in a while since then.

It was in April 2010 first week, he called me last and I promised him, next time when I visit India, I will make it a point to travel via his city and meet him.

Although I visited several times after, due to conflicting and hectic schedule, it never happened. However, I kept on writing him mails and was hoping that he was busy but reading my clicks and writes, as he used to tell me and appreciate them whenever he calls.

He was not a regular on email and his schedules were also not easy to reply and hence I thought he must be extremely busy. Last week suddenly, I received an email from a common friend based in Saudi Arabia, asking me about my friend’s or his family contact details back home. In his letter, he wrote about his demise in the first week of April itself.

It was a shock for me when I checked my diary. I found it was exactly after a day he talked to me. All throughout our friendship, he never asked me anything, but that time, he had asked me to enquire about a recording instrument, which may be obsolete now, but may still be available in Dubai second-hand market.

He told me that time itself it may be difficult to find, and even then I searched for it and never found one such unit and had written to him in one of the emails. My emails continued till I received this shocking news. We meet people strangely in our life’s journey and some remain with us, some move away. Some even though they move, still remain in many ways in our memories, thoughts and deeds. Levin Madhavan was one such person, who will remain in my thoughts and prayers throughout my life.

To read it in original, please visit GULF TODAY online. 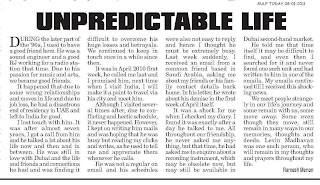 Posted by ClicksandWrites at 11:00 AM