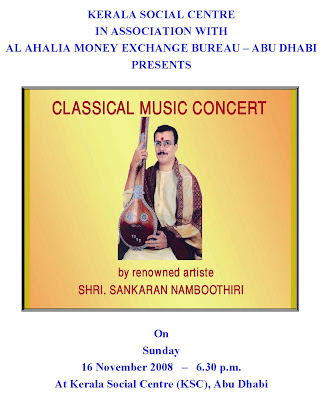 Recognised at the youngest A Grade Artist, Sri Sankaran Namboothiri started performing concerts at a very young age of 11 and by the year 13 he had already started taking the famous sabhas by storm.

He has been the recipient of many honours and titles including the Yuva Kala Bharathi from Bharat Kalachar, Chennai and Gananrutha Surabhi by Sree Vidya Peetam, Kallidaikurichi, Tirunelveli.

Sri Sankaran Namboodiri has performed in all the major sabhas of India and has also performed concerts in the United States of America, United Kingdom, France, Germany, Switzerland, the Netherlands, Kuwait, United Arab Emirates, Kenya, etc…. He has to his credit several cassettes and CDs released by HMV, Sangeetha, AVM, etc. He is also enlightening music lovers and music aspirants through the popular television programme “Nadopasana” aired from Jeevan TV.

Sri Sankaran Namboodiri is involved in the treatment of patients by music therapy in various hospitals in India.
Posted by ClicksandWrites at 7:57 AM

Email ThisBlogThis!Share to TwitterShare to FacebookShare to Pinterest
Labels: Events Covered and Reviews