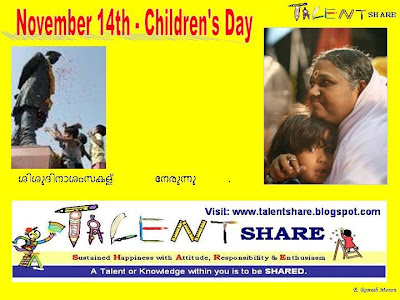 Children's day was first celebrated worldwide in October, 1953, under the sponsorship of International Union for Child Welfare, Geneva. The idea of Universal Children's Day was mooted by late Shri V.K. Krishna Menon and adopted by the United Nations General Assembly in 1954. 20 November is Universal Children's Day. First proclaimed by the UN General Assembly in 1954, it was established to encourage all countries to institute a day, firstly to promote mutual exchange and understanding among children and secondly to initiate action to benefit and promote the welfare of the world's children. 20 November is the anniversary of the day when the United Nations General Assembly adopted the Declaration of the Rights of the Child in 1959. The Convention on the Rights of the Child was then signed on the same day in 1989, which has since been ratified by 191 states.

from WIKEPEDIA
Posted by ClicksandWrites at 3:07 PM

Email ThisBlogThis!Share to TwitterShare to FacebookShare to Pinterest
Labels: Events Covered and Reviews