Look what happens if you visit Bengaluru 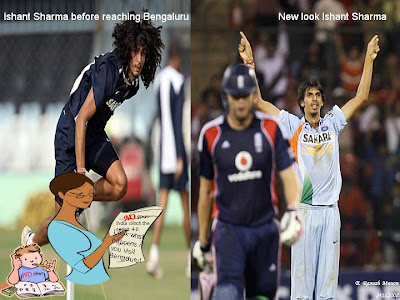 Watching the final moments of yesterday's match was really intersting to see the way M S Dhoni riding on his success once again. It was not just the stroke of success but also planning and execution. The way the England batters were hitting, it was smooth run up towards their first outing. But, our bowlers continuously changed the line and length and brought in variations mixed with off and wide balls to tempt them to strokes, edges and catches. In the scheme of things, the better captaincy prevailed. Once again, this bring forward my favorite topic - do you foresee a comeback for our boy Sreesanthan to the new look team (in style too - look at Ishant!). I doubt very much so, unless and otherwise, all the gods together do some miracles for the prayers and offerings he and his family are doing. It also bring me the question of the disciplined approach which Dhoni is propagating on the field and outside - and whether will he (Sreesanth) ever fit in to the scope of this new execution plan and team.

Interestingly, I was looking at a new section Malayala Manorama has started yesterday - Manorama Newsmaker 2008 - and projecting Sreesanth as one of the contestant amongst sports personalities from Kerala. What has he done after the IPL series last year to be in the news. Of course in a negative way - lot. But, why not give others who really contributed for Kerala Sports and deny them a chance? Even from Cricket, there were more than one good players and performances during the year 2008 which made all Keralaites proud. I couldn't resist writing to them and eagerly waiting for the after effects of it. Let us see if they continue with him or add one more celebrity - Sabareenath to this list. Of course, he too deserve to get a chance. And if more space, Chandramathi too - for all the support and efficiency to escape for such a long time.

Posted by ClicksandWrites at 9:54 AM

Email ThisBlogThis!Share to TwitterShare to FacebookShare to Pinterest
Labels: 01 No News