How many more deaths we need before a pedestrian over bridge at Kadugodi?

How many more deaths we need before a pedestrian over bridge at Kadugodi? 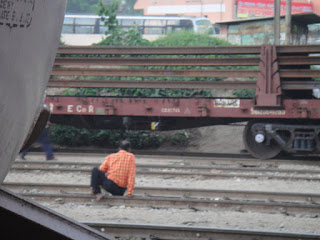 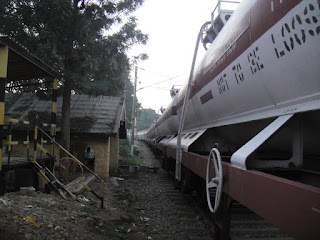 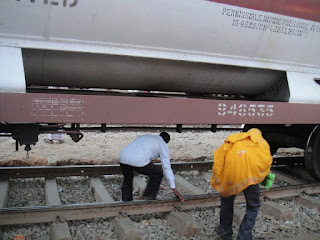 Every morning and evening we witness very sad scenes at this major point of Whitefield.

The railway crossing connecting Kadugodi population, the Bus stand and Railway Station is causing lot of difficulties for all.

At any given time there will be a goods train with endless carriages, waiting for signal.

It makes life difficult for all age a difficult process to cross over. It is extremely difficult in the morning as one rush to the bus stand to reach office or school. Children and aged have to squeeze down or walk all the way till the end and then cross over.

At night time, there is absolutely no light making it all the more difficult.

Add to these the perils of no light and human and animal feces.

Last month, a series of deaths happened and authorities, as usual came out with interim measures like police posting, and offer of a pedestrian overbridge soon. But, it all died down, and now we do not see any police and the story of the long train blocking the smooth passage of the population continues once again.

All responsible authorities are aware of this, but they find it interesting to pass the blame from one responsible shoulder to another.

This is a serious safety issue that affects the normal movement general public in and around Kadugodi and Whitefield, irrespective of whether they are rich or poor, old or young, man or women. Thus, I request authorities to kindly stop having a callous approach to this citizen problem.

A senior railway official, who responded, informs that:

·        No provision was available in the old estimate of road over bridge, to construct foot over bridge at the above location. This might be due to the reason that the old estimate for the road over bridge was prepared long ago and at that time, there might not be so much development at Whitefield and so much requirement to cross the tracks so often by such a huge populace.
·        The role of Railways is only to the extent of providing an unhindered path for road vehicles in the interest of closing the level crossing.  Land at the level crossing belongs to railways. Providing a separate path for road vehicles is in fact the requirement of road users.
·        Railways, though not obliged, have agreed to execute the work as well as to share the cost of work with BBMP with the only interest of closing the level crossing to avoid the recurring expenditure of maintenance of level crossing once for all.
·        When there was public demand to construct foot over bridge, as Railways have already constructed road over bridge, it was expected that BBMP would come forward to fund the cost of the foot over bridge.
·        Finally, when BBMP has agreed for the same, Railways have invited tender for the same without any delay and opened the same on 27.12.2012, though the funds have not been deposited by BBMP.  Invitation of tender without availability of funds, which is normally not done, was done in the instant case only in the interest of expeditious completion of the work.
·        The tender, which would otherwise take 2-3 months for finalisation, has been finalised in a record time of 20 days.  This is a record of Indian Railways.
·        You will be happy to note that a joint inspection has been conducted by the undersigned on 17th Jan 2013 and the work of removal of obstructions has already been commenced.  This is also a record of Indian Railways where the work has been taken up on the very next day of award of the tender.
·        Two records have already been established as mentioned above and we look forward to establish a third record by completing the work in a record time.
·        It was reported by security authorities that either one or both of the deceased were talking over mobile phone during the time of the incident on 02nd Jan 2013.  Only God knows the truth.
·        I want you to understand that in the entire episode, there was no apathy, there were no petty egos and there was no inability to act on the part of Railways.  You are a better Judge to know where the delay took place. Please go into facts in detail before blaming any particular authority.
·        Railways have not received the funds for the above work from BBMP till date and we are  continuously chasing for the same.  At the same time, we are taking care to see that the agency does not stop the work, though it cannot get payment of a single rupee till the fund is deposited with Railways.
·        As a concerned citizen, you may like to do something about this.

And we as citizen who are affected continue with our following plea to BBMP and Railway as below:

·        Please post security personal till the over-bridge is completed.
·        Lighting in that area.
·        Minor adjustments in parking of the long goods train so that people will get sufficient gap to cross.
·        We understand that many of the above things do not come under the responsibility of railways. However, the public who are forced to cross the tracks do not have any alternative. The narrow road over bridge is very scary especially for a women carrying small kids.
·        Could this be done by Railway authorities as an interim measure besides the above suggestion of moving the wagons a little beyond.

We are also surprised to know following things:

·        There are no specifications for the width of road over bridge.
·        There is no process for correction of old plan based on the present needs. The actual work of this over-bridge happened recently.
·        No pedestrian convenience required to be considered.
·        4. After the construction of this over bridge, seeing the practicality, railway engineers should have avoided digging the road between the tracks for pedestrians.
·        We all appreciate Railways good intention and any sort of help from Railways to minimise the problem, until BBMP acts in the matter.
·        At the same time, we urge BBMP to act without any delay in progressing the work before we hear of another tragedy.
I also seek support of all resident associations, corporate organizations and their staff  and political parties, irrespective of any difference in ideologies to support in this cry for the need of a safe system to cross over.

Otherwise, for residents of Kadugodi, the way to bus stand is always going to be down and under.

Posted by ClicksandWrites at 8:47 AM