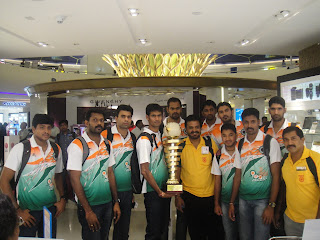 This is the Indian Senior Volley Ball team on their way back to Madras after winning a prestigious tournament. I met them at Abu Dhabi Duty Free. There was no fanfare, no one even asking them who they were.

I happened to meet them, the Indian Senior Men's Volley Ball Team members at the Abu Dhabi Duty Free on 28th August 2011. They were returning to Madras via Abu Dhabi after winning the 18TH NURSULTAN NAZARBAYEV PRESIDENT’S CUP INTERNATIONAL VOLLEYBALL TOURNAMENT ALMATY, KAZAKHSTAN beating Tunisia in the finals held on 27th August.
Watching those unsung heroes moving around silently and unattended, I was thinking of the scenario then and there, if it were players from Cricket or other sports. I wish there exists a strong campaign to Promote All Sports Simultaneously (I call it Campaign PASS) so that all athletes get due share of accolades and privileges.
They were with established Volley Ball coach Mr. Sridhar.

Repeatedly, I was thinking, if this group belonged to a Ranji trophy or IPL team playing in India. No sports, other than Cricket get due recognition and popularity. Forget about the rewards for those who pursue it.

No wonder children or parents do not favor other sports these days. Money matters. Popularity too.

Indian Sports Ministry should come out with more support, as do organisations and individuals.

Sad to say,  I send this photo and news of the victorious return to several news media. But none were interested. Obviously, they are not cricketers!!!
These athletes do deserve due credits.