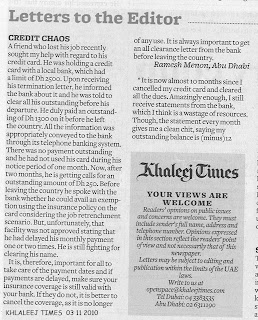 A friend who lost his job recently sought my help with regard to his credit card. He was holding a credit card with a local bank, which had a limit of Dh 2500. Upon receiving his termination letter, he informed the bank about it and he was told to clear all his outstanding before his departure.

He duly paid an outstanding of Dh 1300 on it before he left the country. All the information was appropriately conveyed to the bank through its telephone banking system. There was no payment outstanding and he had not used his card during his notice period of one month. Now, after two months, he is getting calls for an outstanding amount of Dh 250. Before leaving the country he spoke with the bank whether he could avail an exemption using the insurance policy on the card considering the job retrenchment scenario. But, unfortunately, that facility was not approved stating that he had delayed his monthly payment one or two times. He is still fighting for clearing his name.

It is, therefore, important for all to take care of the payment dates and if payments are delayed, make sure your insurance coverage is still valid with your bank. If they do not, it is better to cancel the coverage, as it is no longer of any use. It is always important to get an all clearance letter from the bank before leaving the country.

Ramesh Menon, Abu Dhabi
To read it in original, please visit Khaleej Times online.
Posted by ClicksandWrites at 8:18 AM

Email ThisBlogThis!Share to TwitterShare to FacebookShare to Pinterest
Labels: 02 Khaleej Times, 02 Letters to the Editor, 02 Opinion 2010