Abu Dhabi’s Volcano Fountain: a fire that never went out 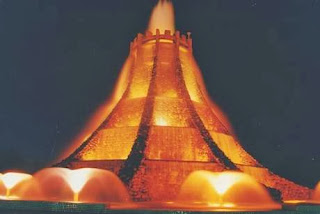 Abu Dhabi’s Volcano Fountain: a fire that never went out


It could be a test of long-term residency. Ask anyone who has lived in Abu Dhabi for more than a decade whether they remember the Volcano Fountain and you’re likely to ignite an outpouring of memories. Built in the 1980s, elevated on a circular pier on the Corniche near the foot of Muroor, the fountain looked like something from The Flintstones, “a page right out of history”.

Or, as the Doha-based author Sophia Al Maria puts it on her blog: “Back in 1988, the Abu Dhabi Volcano Fountain rose out of the Corniche like Triton’s head. It burst out of the boardwalk like a long-submerged alien ship rising from the sea. Its scented water cascaded down through the prongs of a turret-like crown. That cement halo still floats sovereign over all my childhood memories of Abu Dhabi.”

Also known as Al Shallal (waterfall in Arabic), the stone-paved fountain, surrounded by tiered gardens with flights of stairs leading up to its base, was lit up at night to give the cascading water the appearance of lava. Vendors sold fried peanuts, fresh chips, ice cream, newspapers and balloons, and photographers snapped pictures of people posing in front of it, much as they now do at the Burj Khalifa.

The fountain was called a must-see in guidebooks and featured on Abu Dhabi postcards. More significantly, it was a gathering place for the growing city’s many nationalities, at a time when there were fewer social options and no mobile phones to arrange a spontaneous meeting place. 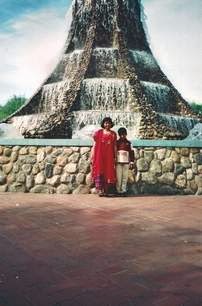 Meeting at the Volcano Fountain was almost a given. “It was the primary focal point for any visitor to Abu Dhabi during that time,” says Ramesh Menon, who came from Kerala to work in Abu Dhabi in 1987. He remembers it as a place where couples met for the first time, where proud parents brought their newborns from the nearby Corniche Hospital, where fellow Indians returning from home would open parcels and distribute letters. “It holds a special significance,” Menon says. “It created a lot of feelings within people.”

Jasmine Godfrey, who was born in Abu Dhabi 41 years ago, remembers many “joyous” times with her family and young friends at the landmark. “We used to spend most of our time there,” she says. “Wherever you are, you come over there to meet us.” 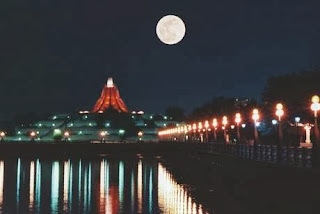 The fountain was also the site of National Day celebrations, the area surrounding it decorated with thousands of flags and lights. As Christine Nowell and Nick Crawley wrote in their 2001 book Now & Then: Abu Dhabi: “National Day is celebrated throughout the Emirates […] on the Corniche, young ladies in their finest dress dance in the traditional way to the dulcet tunes of the flute and drum. The events take place at the so-called ‘Volcano’ roundabout on the afternoon of the 2nd day of December and continue into the evening.”

Abu Dhabi’s Volcano Fountain wasn’t alone in the world: one was built at Honolulu International Airport in the 1960s and a more grandiose version entertains crowds at the Mirage hotel in Las Vegas. But Abu Dhabi’s still takes a place of honour in online lists of the world’s most beautiful fountains, along with the Trevi Fountain in Rome and the Bellagio Fountains in Las Vegas.

After it was demolished in 2004 as part of a redevelopment of the Corniche, Menon was taking a walk in the area and had a flash. “Why not identify a place and bring it back?” He got in touch with the Abu Dhabi Government about his idea and he believes it’s not a closed case. “They all know the value of it.”

Posted by ClicksandWrites at 7:36 AM