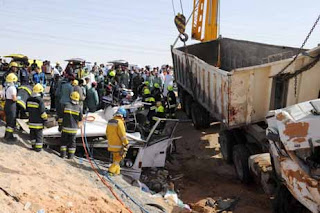 A total of 22 people have been killed and about 24 injured in a road accident in the city this morning.

The crash happened on the Old Truck Road (E30), near Sih Sabra, Al Ain, just before 8am when a bus carrying 46 workers thought to be from a cleaning company collided with a large lorry carrying concrete.

The lorry overturned and landed on the bus at 7.53am when its brakes failed, according to Brig Gen Hussein Ahmed Al Harthi, head of the Traffic and Patrols Directorate at Abu Dhabi Police. He also said there wasn’t a safe distance between the two vehicles.

“Twenty-two people were dead at the scene and the bodies were taken to Al Ain Hospital. There were 24 others injured, and their injuries ranged from minor and moderate to serious,” he added.

The accident is thought to be the worst in the history of the UAE.

Police sources said the injured sustained moderate to serious injuries. A total of 11 of them were taken to Tawam Hospital and are currently in stable conditions in intensive care units or in surgery, a hospital employee said. The dead, all of whom were Asian, were taken to Al Ain Hospital.

Brig Gen Al Harthi along with other senior police officials reported to the site of the crash.

Five of the injured men were transferred to Al Noor Hospital, where three were treated for minor injuries, said a member of staff.

“We received five patients in our ER department, and the nature of the injuries varied,” he said.

“Two of them were minor and were treated and sent home. One had a foot injury and is still in the hospital but will most likely be sent home.

“The last two, their situation was more critical.”

All police units were immediately dispatched to the scene upon receiving the report to rescue victims that were trapped in the bus and to provide first aid to the injured.

One victim with a severe injury was airlifted to Tawam Hospital.

The director of the Traffic and Patrols Directorate at Abu Dhabi Police urged contracting and general transportation companies officials to ensure the safety of brakes and other parts of their vehicles before departure and to take buses and lorries off the road in times of fog and rain. He also urged motorists, in general, to avoid overloading their vehicles.

Brig Gen Al Harthi praised the swift response of all police units and expressed his condolences to the families of the deceased and wished the injured a quick recovery.

My comments as follows:

Extremely sad to read about this tragedy, probably the worst in the history of UAE in a single one on one collision. While we all pray for the departed souls, let the authorities come out with stricter rules on speeding. The speed of buses transporting labourers to and from work in the morning and afternoon hours are scary and at times dangerous for those who are cautious on the road. Refresher courses on road safety and vehicle condition to all heavy duty drivers every year or two as they renew their visas is an option to educate them about newer conditions and road realities. Companies handling heavy vehicles and drivers should also think about having a safety expert or seek training through authorized safety institutes approved by police to give continuous guidance to drivers to adhere to road safety guidelines all the time.

To read it in original, please visit The National online.

For more pictures, please visit The National online
Posted by ClicksandWrites at 7:16 PM