Urumi – an epic unfolded with creativity and aesthetic beauty

Urumi – an epic unfolded with creativity and aesthetic beauty 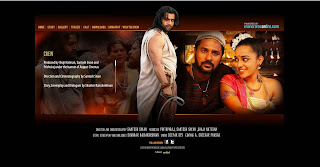 Expectations were really high when we entered the Eldorado Theatre in Abu Dhabi to watch the movie Urumi. A move directed by Santhosh Shivan having Prithviraj, Prabhu Deva, Jagathy and Genelia in main roles definitely bound to be. The initial oration by KPAC Lalitha did bring in the early interest to the almost 3 hours of picturesque and innovative picturisation of an ancient folklore about Vasco da Gama. Tell you, it did mark a strong “Santhosh Shivan” presence in each and every frame of the movie. An advantage for major part of the movie in terms of visual treat for the audience and a slight disadvantage at times in terms of flaws in directorial nuances.
The whole movie has been presented with beautiful permutations and combinations of every major artists in it. Prithviraj as Kelu Nayanar outshined his contemporary form Krishna Das by miles. Prabhu Deva excelled in both his different roles throughout the movie and presented once again for the movie world that, he is never going to get aged on his trademark movements, comedy and presentation style. Jagathi Sreekumar as Chenichery Kurup proved once again to us that he is one actor for whom characters are a cakewalk. Genelia as Ayesha with her excellent performance outshined at times even the male actors. Nithya Menen added an innocent and attractive variety to the movie and story line and perfectly justified her role throughout. This performance will definitely give her opportunities to fill in many open slots up for grab in South Indian movies.
Tabu in her cameo was beautiful as ever. However, Vidya Balan disappointed. Probably due to lack of frames she has in this story telling, at times, she was left seen with no expressions and emotions, which was inexcusable from an actor of her calibre in a classique of this nature.
Amol Gupte as Chirakkal Maharaja, Ankur Sharma as Chirakkal Crown Prince Bhanu Vikraman, Alexx ONell as Estêvão da Gama, Robin Pratt as Vasco Da Gama, Bharath J as Beeran Kutty, Arya as Chirakkal Kothuwal and Thandachan played individuals roles to perfections.
The camera throughout the movie presented a lush watery green that reminded a nostalgic memory for all those who love the gods own country.
The fight scenes were done excellently well and the narration at the beginning of the movie that “no animals were harmed in the movie” augmented a sense of responsibility by the producers and crew towards animal rights.
Costumes and make up, especially of all the female artists were simple and outstanding. Prithviraj and Prabhudeva's make were natural.
Shankar Ramakrishnan’s script well conveyed the story throughout in a beautiful manner and took the viewers guessing till the end. However, at times I felt, he and Santhosh Shivan could have concentrated on dialects in the dialogue presentation, which seemed to be out of place.
Music by Deepak Dev scored brilliantly on background and one song "Chimmi Chimmi" done as a tribute to M. G. Radhakrishnan, will remain on the lips, caller tunes and memories of movie lovers for a long time for its beautiful presentation by the singers and actors in it. The folk, lullaby, ballad part of the music were interestingly audible and well presented.
A valiant and successful attempt by Prithviraj, Santosh Sivan, Shaji Natesan for producing a good movie to watch with family, especially children to give them a different version of struggle undertaken during the yesteryears by our unsung heroes.
An overall brilliant effort by Santhosh Sivan and Prithviraj and looks like the year ahead belongs to both of them.