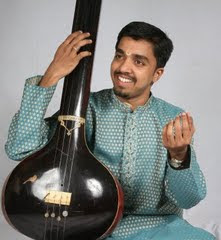 Kuldeep M. Pai stands in the forefront of the next generation of star performers of Carnatic music. With several years of pleasantly arduous training in vocal as well as instrumental music, continuously honed by some of the greatest of Indian musicians, Kuldeep’s music has a multi-directional discipline and feeling that are evident in his performances. His training in playing several accompanying instruments manifests clearly in the way he engages with the accompanying artists and their music.

Kuldeep M. Pai’s training began as early as age three, at Kochi from where he hails. His obvious versatility in playing mridangam, violin and harmonium were duly nurtured with adequate training. Kuldeep’s musical lineage is an illustrious one – he has been trained by Vidwan Shri N. P. Ramaswamy (Kochi) and later in Chennai by Vidwan Shri O. S. Thyagarajan. Vidwan Shri Mannargudi Easwaran has provided Kuldeep with a specialised training in the highly nuanced technical aspects of rhythm in Carnatic music. Kuldeep also has the academic vista open for him what with a Gold Medal in his Masters Degree in Indian Music from the University of Madras, Chennai.