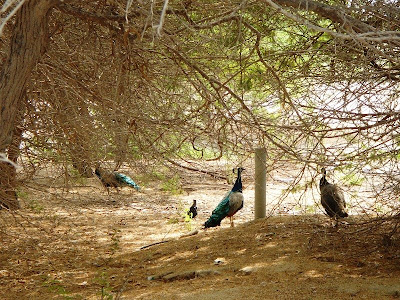 Futaisi Island was recently in the news for the discovery of 22 ancient water catchments by archeologists. The islands history is likely to date back hundreds of years judging by the existence of old water wells, an ancient mosque and a grave yard.

It is speculated that before the discovery of oil, Futaisi Island probably supplied sweet water to the population of Abu-Dhabi and all the stone required for building the forts and houses of the rulers. The geological past of the Island is certainly unique and is an interest to both tourists and scientists alike.

The well-kept stables house purebred Arabian Horses that are available for touring around the island. Children and adults who have never ridden before, but who would like to discover the pleasure of riding an Arabian horse or a camel can also be taken for rides.

Covering an area of around 50 Sq Kilometers, only a small area has been developed. The rest of the Island remains quiet and undisturbed, creating a very effective wildlife sanctuary.

Discover the Island on Bicycles or take a mini-bus tour around the Island to see Gazelles running free, Ospreys nesting on outbreaks of rocks and Hidden Lagoons in the mangroves. As you explore the Island you will soon start to spot an abundance of Gazelles running and jumping across the flats or in and out of the mangrove clusters. This particular variety is endemic to the Island and is left to breed in peace.

Less obvious but there for the keen eyed are Dhubs – Spiny Tailed Lizards. The prehistoric looking creatures are particularly large on the Island and due to the lack of persecution are relatively approachable.

The Island is a bird spotters dream. Huge nests have been built around the Island on outcrops of rocks by Ospreys comfortable in the knowledge that they won’t be disturbed and even the endangered Sea Eagle has found sanctuary here. The list of other winged creatures is extensive including Socotora Cormorants, Terek Sandpipers and Plovers.

The Island is also an important transit point for migrating birds and flamingoes are commonly seen on the shores of the Island. Sightings of the endangered Green Sea turtle as well as dolphin’s bear’s testament to the rich marine life in the waters surrounding the Island.

A narrow bridge spanning one of the many lagoons takes you to a hidden beautiful beach on the far side of the Island.

Another major attraction on the Island is an authentic Arabian fort built out of traditional materials such as mud bricks. The fort provides a unique setting for banquets and parties.

The true treasure of Futaisi Island is its untouched nature. As the entire sea area around the Island is very shallow, boat access is difficult and this has ensured that most of the Island remains quiet and undisturbed, creating a very effective wildlife sanctuary over the greater part of the island.

The Island is a shelter for a rich and diverse variety of flora and fauna, including a species of gazelle that are endemic to the Island, the endangered Sea Eagle, Ospreys, the famous Dhoub lizard, and Jack Rabbits. The Island is also an important transit point for migrating birds and flamingoes are commonly seen on the shores of the Island. Sightings of the endangered Green Sea turtle as well as dolphin’s bear’s testament to the rich marine life in the waters surrounding the Island.

For more information and booking a trip, visit: http://www.futaisi.com/about.htm
Posted by ClicksandWrites at 11:14 PM