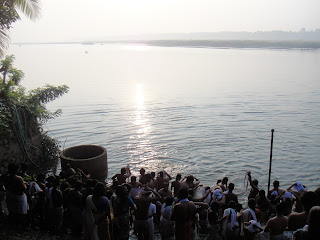 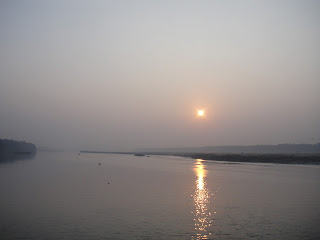 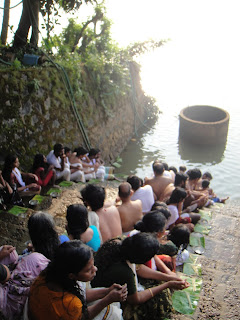 It was our first visit to this famous temple, Thirunavaya Nava Mukunda Temple.
Thiruvanaya Navamukunda Temple, near Ponnani in Malappuram district is situated on the banks of the river Bharathapuzha.
Thirunavaya was once the capital of Perumpadapu Swaroopam. It is indeed the cradle of culture in northern Kerala. Holding immense historical importance, this is the place where 'Mamangam', a grand assembly of the rulers of Kerala was held once every 12 years, in olden times. This extravagant festival was held for the last time in 1755 AD.
The famous and ancient Thirunavaya Temple, known throughout the country as an ancient teaching-centre of the Vedas, was once plundered and destroyed by Tipu Sultan's army. It was the Zamorin who repaired the temple later.
Thirunavaya is considered equivalent to Varanasi because of the presence of Shiva, Vishnu and Brahma temples.
(Reference source : http://www.vaikhari.org/thirunavaya.html)
It is said to be very auspicious to do the religious rituals at the banks of this famous temple to departed souls within and after the stipulated ceremonial days associated with death of our relatives. Therefore, it was our wish to be here on the 12th day of our ammas demise.
The temple is very well organised and the priests or acharyas for doing these detailed pooja and kriyas  are fully devoted and never showed any sign of greed for money, normally associated with those doing services for such rituals.
We were recommended to meet Sri Unnikrishnan Elayath (Mobile : 00 91 9249259226) who is one of the senior most amongst them. Kriyas are done in three batches, starting as early as 5:00 am. The second batch start at 7:00 am and then the third at 09:00 am. It takes normally one and half hour to complete the full set of rituals. He does it in such a way that those who are doing the rituals really feels the presence of their close ones who left them from this world.
It should be noted to carry a coin along with you when going to perform the rituals as there are procedures to place the coin and then offer prayers. For those who do not carry them, he himself gives the coin. It is advisable to offer a nominal dakshina after the rituals and prayers associated. However, he never insists on it, and saw many leaving immediately without offering any dakshina or namaskaram to the priest.
It was really satisfying to see at least one more place of religious importance where greed for money did not rule over the rituals and sanctity associated.

Posted by ClicksandWrites at 7:22 AM