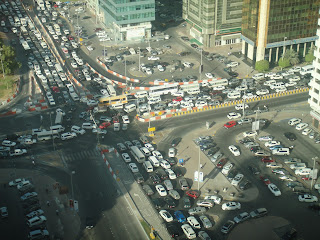 Traffic is grid locked on in this view of a Salam street intersection. Courtesy Ramesh Menon

Accidents in the city centre and on the roads leading into the capital have caused chaos on the roads this morning.

Commuters on Sheikh Zayed Road heading towards Abu Dhabi are currently stuck in gridlock after the part of road opposite Al Rahba Hospital was closed forcing drivers to crawl along a two lane side street.

The Abu Dhabi police, through their twitter page have advised that motorists exercise caution in the tourist Club Area, Al Najda street, Al Salam street and Hamdan street, where there are heavy traffic jams.

Earlier this morning motorists were held up as much as an hour by a seven car accident on the interchange before Mussafah bridge. According to Abu Dhabi police twitter site, the area was clear by 9.40am.

To read it in original, please visit THE NATIONAL online.
Posted by ClicksandWrites at 5:12 PM

Email ThisBlogThis!Share to TwitterShare to FacebookShare to Pinterest
Labels: 01 Photo Speaks, 02 Letters to the Editor, 02 Opinion 2010, 02 THE NATIONAL, Clicks, Clicks and writes, Writes