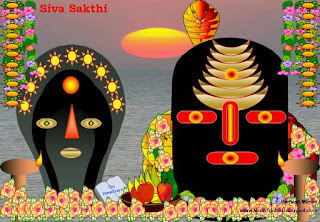 This year the Mahashivarathri is on 7th March 2016.
Let me repost an old article and a presentation named ShivaSakthi created by me marking the relevance of this day.
These days, we blindly follow several different types of days, for eg: Valentines day, mothers day, fathers day, friendship day, no-smoking day and the list goes on and on. When we look at it Shivarathri is the truly traditional family day or Pati-Patni day, as I term it. Because, from the ancient times, devoted wife's pray and observe fast on this day for the well being of their husband and children and vice-versa, husband's observe religious rituals and prayers like chanting Rudram and chamakam to give grace and prosperity to the well being of own family and the society.
There are many stories associated with Shivaratri and its origins.

One is about lord shiva drinking a poison and he held it in his throat by binding it with a snake. The throat became blue due to the poison (Thus Lord Shiva is also known as Neelakantha) and Shiva remained unharmed. In another story, it is said that the whole world was once facing destruction and the Goddess Parvati worshiped her husband Shiva to save it. Parvati named the night for the worship of Iswara by mortals Maha-Sivaratri, or the great night of Siva. After creation was complete, Parvati asked Shiva of which rituals pleased him the most. The Lord replied that the 14th night of the new moon, during the month of Maagha, is my most favourite day. It is known as Shivaratri. Parvati repeated these words to her friends, from whom the word spread over all creation. Another story is about a hunter. Lubdhaka, a poor tribal man and a devotee of Shiva, once went into the deep forests to collect firewood. At nightfall, he became lost and could not find his way home. In the darkness, Lubdhaka climbed a bel tree, and sought safety and shelter in its branches until dawn. All night, he could hear the growls of tigers and wild animals, and was too frightened to leave the tree. In order to keep himself awake, he plucked one leaf at a time from the tree and then dropped it, while chanting the name of Shiva. By sunrise, he had dropped thousands of leaves on to a Shiva lingam, which he had not seen in the darkness. Lubdhaka's all-night worship pleased Shiva. By the grace of Shiva the tigers and wild animals went away, and Lubdhaka not only survived but was rewarded with 'divine bliss'.

While most Hindu festivals are celebrated during the day, Mahashivratri is celebrated during the night and day that come just before the new moon. Each new moon is dedicated to Shiva, but Mahashivratri is especially important because it is the night when he danced the 'Tandav', his cosmic dance. It also celebrates the wedding of Shiva and Sati, the mother divine. Night represents evil, injustice, ignorance, sin, violence, and misfortune. Tradition says that Shiva, like his symbol the new moon, appeared in order to save the world from darkness and ignorance, before the world entered complete darkness. Those who observe the Mahashivratri fast only break their fast the next morning, and eat the prasad offered to Shiva. Young girls observe the fast and worship Shiva so that he may bless them with good husbands. They sing devotional songs in praise of the lord, and holy texts are chanted throughout the night. The pandits in the temples perform the puja according to the scriptures. This is done four times during the night.

For this auspicious day, I would like to dedicate to our global forum a painting named ShivaSakthi. It is also a dedication to all the loving mother's, wife's and sisters and also to all our fellow brothers for keeping our tradition and values always high, wherever we are.
I would like to also add a few words about this painting.

This is created purely using powerpoint tools and it was done as a result of a few minutes of quite time at a small temple near REC Chathamangalam, Calicut. On that particular monsoon evening (in 1995), it happened to be that there was no power in that area, and the darshan of the deity at the time during deeparadhana created an everlasting memory in my mind. The decoration of the Devi idol, simple and small, by the melshanti (priest) was simply superb. I added to it a similar devotion at another temple, which is Avittathur Mahadeva temple. And the result is this creation – Shivasakthi.

At both these places, the time available by the melshanthi (priest) to decorate the idols during the time the sanctum sanctorum closed for pooja, was barely 10 minutes or so. And imagine yourself the result when the doors are opened. It is the epitomisation of the ultimate sraddha (concentration), the dedication and devotion to provide us a blissful presence.

Can you imagine them practising this art somewhere else? Or re-doing it, if a little more of water has been added to the chandan and kunkum or bhasmam they mix in order to create these decorations.!!

There are many unsung heroes and these are a few among them. And it is also my way of tribute to the many who remain within the four walls of our own religious boundaries, who do not get to watch or listen to any of the niceties which we are blessed with.

No one has the patience these days, and to add ease to it, we have a wonderful creation called remote control. It makes things easy for our wandering minds to switch from one programme to another and to refrain from keeping focussed on one.

We undergo several rigorous rituals and follow procedures for many days and ultimately visit our favourite temples and the moment we are in front of the deity, we close our eyes and fall into deep prayers. At this moment, we go back to the old thoughts, photos etc, forgetting about the opportunity to meet the real lord who is in front of us in full – paadadi kesham. And we are pushed away for someone else to do his minutes or seconds of closed eye prayers. The moment you close your eyes, you forget your objectives.

Open your eyes, look at the realities, and react to it.

As the prayer song "Geet nahi, Sur nahi, phir bhi mem gavoom", in this spiritual sphere of mental peace and inner joy, the responsibility for success or failure is entirely one's own.

God bless and have a great time sharing good thoughts and deeds.