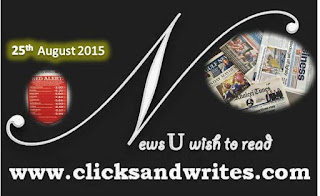 Note: News U Wish to Read is a compilation of articles published in the press, in the UAE, India and world around. Its purpose is to keep us informed of important news items which we all wish not to miss. Enjoy reading the below news items and links. More sections will come as it takes shape and interest. Your response to this initiative is highly appreciated.

Bears took control of Gulf bourses on Sunday in the wake of lower oil prices and Friday's global selloff of capital markets. The Dubai Financial Market General Index plunged seven per cent to 3,452.5 points, its lowest close since March 30. Its neighbour, the Abu Dhabi Securities Exchange, recorded a 5.01 per cent decline and closed at 4,286.49 points. Other Gulf countries also followed the bearish mood. Saudi Arabia's Tadawul index lost 6.86 per cent, Qatar's main benchmark finished down 4.7 per cent, Oman's Muscat Stock Market witnessed a 2.94 per cent decline and the Kuwait Stock Exchange suffered a 2.36 per cent loss. Bahrain also declined, but it was the only market that lost below one per cent at 0.37 per cent. Oil prices plunged to their lowest level in more than six years on Friday, closing the day at $45.46 a barrel. The Dow Jones Industrial average also recorded its biggest loss in four years on Friday, closing down 3.1 per cent on growing fears over China's slowing economic growth.

UAE stocks get off lightly as global rout persists
The National

UAE investors helped local equities escape relatively unscathed yesterday, even as plummeting Chinese stocks and additional pressure on oil prices provoked a further global sell-off of shares. China’s Shanghai Composite plunged 8.4 per cent yesterday, despite a move by authorities to allow pension funds managed by local governments to buy shares in an attempt to halt declines. The sell-offs hit bourses across Asia. Hong Kong’s Hang Seng ended the day 5.1 per cent down, while the Nikkei fell 4.6 per cent. In Europe stock markets in London, Paris and Frankfurt all ended down more than four per cent. However headline indexes in Dubai and Abu Dhabi ended a volatile day of trading only marginally down, as investors took advantage of attractive valuations to pile back into blue chips. The Dubai Financial Market General Index fell by 6.1 per cent to a new low for the year in the opening minutes of trading yesterday, before rallying into positive territory about midday, and finally closing down 1.4 per cent at 3,401.62.

The Dow Jones industrial average finished down 585 points  on a day of massive swings. The U.S. stock market took investors on a stomach-churning ride Monday, as the Dow Jones industrial average briefly plunged more than 1,000 points and sent a shiver of fear from Wall Street to Main Street. Stocks regained much of that ground as the day wore on. But the slump - part of a global wave of selling triggered by the slowdown in China - reflected uncertainty among investors over where to put their money when the world's second-largest economy is in a slide. "What's a company that's doing business with China actually worth right now? When you're not sure, you tend to sell," said JJ Kinahan, TD Ameritrade's chief strategist. The Standard & Poor's 500 index also fell sharply shortly after the opening bell, entering "correction" territory - Wall Street jargon for a drop of 10 percent or more from a recent peak. The last market correction was nearly four years ago. U.S. treasury securities surged as investors bought less risky assets. Oil prices fell. But investors also saw opportunity, moving fast and early to snap up some bargains. That helped trim some of the market's earlier losses. The Dow closed 588 pointsd down. The S&P 500 was down 73 points, or 3.7 percent, at 1,897. The Nasdaq composite had shed 162 points, or 3.5 percent, at 4,543 points. The three indexes are down for the year.

Global rout extended to Indian markets with the S&P BSE Sensex closing at 1,624 points down. The 50-share Nifty index ended at 7,809 level.
The rupee slumped to as low as 66.69 per dollar, its lowest since September, 2013, as Asian markets reeled under fears of a China-led global economic slowdown. 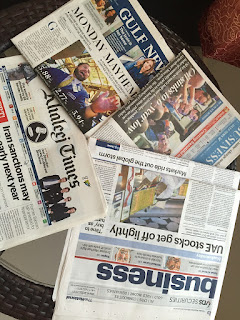 Hope you enjoyed reading the above news items and links. More sections will come as it take shape and interest. Your response to this initiative is highly appreciated.