Mind Speaks - I am a Virgin 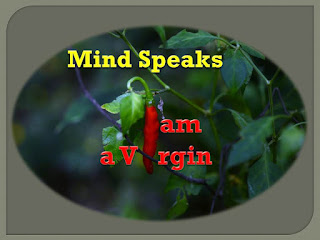 Public Speaking is an art. Some people are very talented at it so much so that we love to hear them speak for any number of hours.

It may be natural for some but for others it may be developed over a period of years. Both require in depth knowledge on the subject they speak and also huge amount of preparation before.

It is also the same case when it comes to answering questions spontaneously after the speech on the subject they talked as well as various others.

I was lucky to listen to three speakers recently. One was a US scientist, who elaborated his mastery and presented it in the simplest manner that even a layman could understand.

The other one was one of my own seniors. With experience in the industry for about 40 years, it is a treat to watch and listen to him on any day. It comes so natural that the audience will never realize how much time and topic is covered until he leaves the podium.

It doesn’t end there as he has a natural way to answer post-speech questions. I haven’t seen him carrying a manuscript for his speech.

However, it was new experience for me and all others gathered who listened to him at a huge gathering.

As he came in front of the podium, he took out a set of papers. Before reading out the key messages from it, he said to all.

“Today, I am a virgin! It is the first time I am reading out from a pre-written note!”

It was really an icebreaker to capture the huge audience. Though he ventured out from the note at times, it blended perfectly.

The third speaker was none other than the honorable Prime Minister of India Sri Narendra Modi. As he entered the Dubai Cricket stadium on Monday, 17th August 2015 evening, the stadium was filled with thunderous applause and all were shouting Modi, Modi, Modi…It took for him a while to blend himself in.

The moment he started addressing the crowd, it became a speech of historic importance. He carried the audience along with him every moment of that talk which lasted more than an hour. He didn’t miss any opportunity to praise the UAE leaders for their hospitality to him and India as a nation of importance to the region, its growth and development.

In his trademark style, he also made it a point to wish the Malayali communities, the largest group in the audience as well as the largest community in the UAE, a happy new year, as it was the first day of the Malayalam calendar year.

A mix of math, science, humor, anger all blended well in his long speech. What he wanted to say, he said and what he didn’t want to say, he didn’t!

Expats who waited for hours wanting to hear about measures from the government to work on reducing the airline charges which are rocketing every day, even during the present time when oil price is at its maximum low, or news on other beneficial measures for expat community left home as they came!

Business and trade community had its share of happiness when he announced UAE’s plans to invest US$75 billion in Indian infrastructure and boost trade between the two countries by 60 per cent. No business will thrive without hard work and acumen to generate the atmosphere for it to thrive. Now, it is up to the business community in both countries to work on this and make things happen.

What inspired me more was his call for action for the audience in general and the Indian Community as a whole to invest in schemes under Prime Minister’s Jan Suraksha Yojana an amount of Rs 600 for their sisters. The schemes target the poor and unorganized sector that are neither covered by any form of insurance nor get pension. Under the accident insurance scheme, a person will be provided cover of Rs 200,000 for an annual premium of Rs 12. The cover is for accidental death or permanent total disability.It has inspired me to look deeper around. I live in a gated community where I know I can contribute towards this and help some of the workers who can benefit from this scheme, with support from members like me.

He reiterated again and again that this huge welcome from the UAE is for the Prime Minister of India, its people for their contribution to the country’s development.

His speech of historic importance proved again, public speaking and presence of mind to take people along and motivate them as they leave the venue is indeed an art which has to be developed by all.

For any established speaker, every stage will be a new one, with new momentum and atmosphere. It is up to them to make it fresh and interesting to leave the podium with ever lasting impression on the audience.  It is the same case as of a performing artist. Practice in the mind and perfect in person. If ever you get such an opportunity as a speaker, keep it fresh, beautiful and attractive to create ever lasting memories.

Let this note inspires you to say and act “I am a Virgin” in whatever you do! May you carry the freshness and exuberance all along.

Posted by ClicksandWrites at 4:02 AM