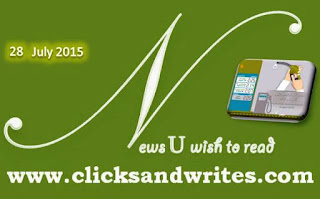 Note: News U Wish to Read is a daily press review compiled and only covers articles published in the press, in the UAE, India and world around. Its purpose is to keep us informed of important news items which we all wish to not miss. Enjoy reading the below news items and links. More sections will come as it takes shape and interest. Your response to this initiative is highly appreciated.

Petrol prices across the country were today increased from Dh1.72 per litre of Special 95 to Dh2.14, an increase of 23.6 per cent. The revised price for Super 98 has been set at Dh2.25 and E Plus at Dh2.07. The price of diesel is set at Dh2.05, a 29 per cent drop from its previous price of Dh2.90. These prices come into effect on August 1 and will be fixed for the month. A new price will be announced on August 28. Dr Matar Al Nyadi, Undersecretary for the Ministry of Energy and chair of the Fuel Price Committee, said the new prices were based on average global prices for petrol and diesel during the month of July with the addition of transport, distribution and operating costs — as approved by the Cabinet for distribution companies. He said the committee would monitor the global prices of petrol and diesel daily and will announce the prices for the following month on the 28th of each month. 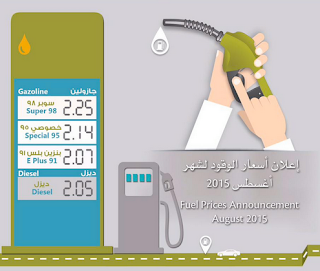 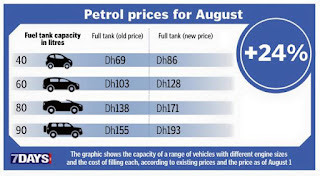 BP takes $10.8b pretax charge after $18.7b settlement.  BP’s second-quarter profit slumped by nearly two thirds from a year ago as it grappled with lower crude prices and took a huge $10.8 billion charge related to the 2010 Gulf of Mexico oil spill. In a sign it was hunkering down for an extended period of lower oil prices, the British oil and gas company also cut its planned full-year capital spending again to “below $20 billion”, after cutting it 13 per cent to $20 billion (Dh73.4 billion) earlier this year. BP reached an $18.7 billion settlement with the US government and five states this month to resolve most claims from the oil spill five years ago, the largest corporate settlement in US history.  While BP had been expected to take a $10 billion charge for this at some point, it said on Tuesday it had also agreed to pay up to $1 billion to resolve claims from local government entities, taking cumulative pretax charges for the Macondo rig explosion and spill that killed 11 workers to $55 billion.  As a result, the company took a pretax charge of $10.8 billion in the second quarter, including a $9.8 billion charge related to the government settlements

Hikma Pharmaceuticals of Jordan has acquired the US generic drugs business of Boehringer Ingelheim for $2.65 billion as it looks to bolster its falling market share in the US.  The acquisition includes Boehringer Ingelheim Roxane, the production arm of the German company, and Roxane Laboratories, its research and development and sales and marketing arms. The deal adds 88 high-value products in specialisations such as oncology and respiration, and also increases Hikma’s pipeline of products under research and development to 89. “The transaction has significant strategic value for us, transforming our position and scale in the US generics market,” said Said Darwazah, Hikma’s chief executive. “The acquisition also significantly expands our manufacturing capacity and technological capabilities.” Hikma expects to increase Roxane’s revenue from the current $725 million to $775m in 2017.

Qatar Airways is in talks to purchase a stake in IndiGo, India’s biggest carrier
Thenational.ae

The “only airline” it is talking to is IndiGo, the Doha-based airline confirmed in an emailed statement, without elaborating, denying local media reports it was negotiating with rival SpiceJet. InterGlobe Aviation, the owner of IndiGo last month filed a draft red herring prospectus to sell shares in an initial public offering. “It could possibly be they take a minority stake,” Kapil Kaul, the South Asia chief executive officer for the Capa Centre for Aviation, said in an interview on Bloomberg TV India. But beyond that, he said he didn’t see what “value addition” Qatar would bring to IndiGo. Low fares and economic growth that boosted incomes over the past decade helped IndiGo find first-time fliers and become the biggest airline in the world’s second-most populous nation. The profitable carrier is a rare bright spot in India’s fiercely competitive aviation sector, where carriers have lost a combined $10 billion since 2009 and IPOs have fallen below sale prices. IndiGo, which flies mostly within the country, operates a fleet of single-aisle planes from Airbus. The carrier started operations in August 2006 just as a rash of budget airlines entered the country, challenging full-service carriers like Jet Airways India Ltd. on expectations that rail passengers would trade up to flights.

t's raining automatic SUVs. Just a week after the launch of the Hyundai Creta, Mahindra has now launched an automatic variant of its popular SUV Scorpio.  The Scorpio automatic will be offered in a 2WD as well as a 4WD option, both of which will be sold in the top-of-the-line S10 variant. The Nashik-based car maker has priced the Scorpio automatic 2WD at Rs 13.13 lakh, while the 4WD version will cost Rs 14.32 lakh. All prices ex-showroom Delhi).

Getting young people to recycle is key for the future
Thenational.ae

More schools should introduce environmental subjects and teach about the importance of recycling as early as possible to produce caretakers for tomorrow’s world, educators say.  “It’s never too early to educate students on the benefits of recycling,” said D J, a science teacher at Glenelg School in Abu Dhabi. “The younger you start, the more natural it becomes and eventually it is just second nature. “This is important as they are the ones who will be able to affect the future.” D J, who has lived in Abu Dhabi for almost 20 years, teaches recycling and pollution in her social studies classes using the three Rs: reduce, re-use and recycle. “Many students understand it as a concept but I’m not sure they understand how important it is to apply,” she said. “This is especially true for water, which isn’t as easily recycled as plastic, for example, and significantly more useful.”  K C, a British teacher, said that it was essential to teach recycling as part of the curriculum.

Smell guides mosquitoes to see a human host
The Hindu

Researchers report on how and when sensory information is used by mosquitoes to home in on hosts.  It may be largely impossible to avoid getting bitten by a mosquito unless and otherwise one can stay in an environment free of carbon dioxide for extended periods, remain nearly invisible and have a cool body temperature. This is because mosquitoes use smell, visual and thermal cues that are both sequentially triggered and act independently to locate a human host, a study found. The smell of carbon dioxide exhaled by humans acts as a trigger and influences the attractiveness of the visual objects that are as far away as 15 metres in the case of humans. An earlier study had found that mosquitoes could detect carbon dioxide as far away as 60 metres in a riverine habitat when its concentration was above the background level.  Once close to a human host, the presence or absence of carbon dioxide becomes irrelevant as they are then guided by body warmth, volatiles emitted by the skin and humidity to land at a feeding site.

Education without skill?
The Hindu

Campaign PASS (Promote All Sports Simultaneously) is an initiative started through my blog to promote all sports(other than cricket – which gets lot of attention) and sports personnel associated to give them more exposure.

India will be fielding its biggest and strongest team at the World Badminton Championships in Indonesia, providing them their best chance of winning medals at the prestigious tournament next month.  It is for the first time that India will have two players within the top 5 -- Saina Nehwal (World No 2) and Kidambi Srikanth (World No 3) as they lead the Indian charge at the Championship which gets underway at Gelora Bung Karno in Jakarta from August 10.  Jwala Gutta and Ashwini Ponnappa had ended India's 28-year-old medal drought at the World Championship when they won the women's doubles bronze in 2011 and then singles player P V Sindhu clinched the bronze medal twice in 2013 and 2014 editions.  However, a medal at the world meet has eluded Olympic bronze medallist Saina, who has not progressed beyond reaching the quarterfinals five times.

Hope you enjoyed reading the above news items and links. More sections will come as it take shape and interest. Your response to this initiative is highly appreciated.