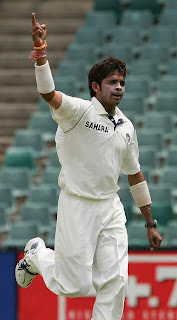 As a cricket lover from Kerala, it is sad to see the 15 names announced for World Cup Cricket 2011 without Sreesanth in it.


I believe, Sreesanth lost the chance not because he lack ability but because of “his mind’s extra agility” which is making the Indian team captain Mahendra Singh Dhoni vary of his plans. Two years ago itself he has told in an interview and I have quoted his statement in a blog post as early as October 2008 (I was reading an article in which Mahindra Singh Dhoni was expressing his comments about his wish to have a good bowler who bowls according to the captains plans).

He at that time clearly mentioned, I want someone who bowls each ball according to the instructions I give. I am not negating here that Sreesanth bowls against Dhoni’s will. But, within his mind Sreesanth has an aggressive player and the conflict to overpower the opposition batsman on his own skills, he end up going against the tide, which may indirectly making his progress difficult. This is an example. However, it doesn’t mean that it is the end of the world. He will fight and come up. As each time, or time has proved that end of the day, Dhoni had no other options, within Indian Fast – medium Fast bowling resource, other than Sreesanth to look forward to when it matters aggression and skills combined within one.

Hope, this treatment, or experience in life will make Sreesanth a more striking bowler in terms of economy and wickets than in terms of hits on twitter and media.

I hope and wish he comments no further as it may reduce his chances further.

I still believe, before the tournament begins, there will be omissions and Sreesanth will play in the final eleven for India in the 2011 World Cup tournament.

Poste Note: In the current sereis between South Africa and India, including this 3rd match Sreesanth did not play. If the team combination before the selection to the final 15th for world cup was an indicator, it was clear that Sreesanth was not in the scheme of things planned by Mahendra Singh Dhoni. In a way it is good for Sreesanth too, as the playing conditions in South Africa are not the same as that of in India. So, the more these selected bowlers play in South Africa, the more the chances for injuries, which may help him to get his spot back into the 15 member squad.
Posted by ClicksandWrites at 12:53 PM