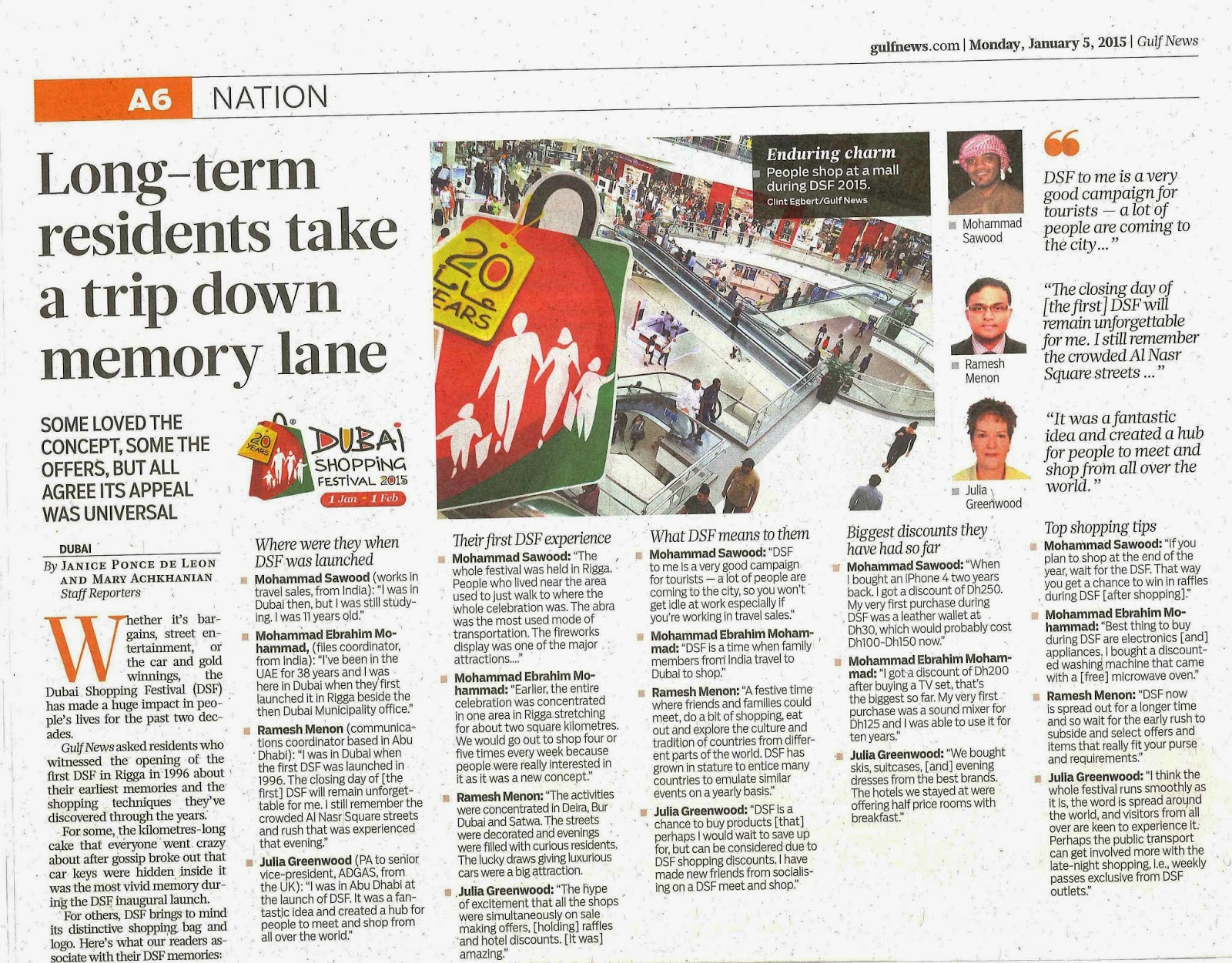 Residents who have been in the UAE for more than 20 years share their thoughts on DSF
By Janice Ponce de Leon and Mary Achkhanian, Staff Reporters
Published: 17:37 January 4, 2015

Dubai: Whether it’s bargains, street entertainment, or the car and gold winnings, the Dubai Shopping Festival (DSF) has made a huge impact in people’s lives for the past two decades.

Gulf News asked residents who witnessed the opening of the first DSF in Rigga in 1996 about their earliest memories and the shopping techniques they’ve discovered through the years. For some, the kilometres-long cake that everyone went crazy about after gossip broke out that car keys were hidden inside it was the most vivid memory during the DSF inaugural launch. For others, DSF brings to mind its distinctive shopping bag and logo. Here’s what our readers asscoaite with their DSF memories:

Where he was when DSF was launched:
“I was in Dubai then, but I was still studying. I was 11 years old.”

Experience during first DSF:
“The whole festival was held in Rigga. People who lived near the area used to just walk to where the whole celebration was. The abra was the most used mode of transportation. I remember there was a bunjee jumping contest where people who’d try out and touched the water of the Dubai Creek would get to win two cars. Only the brave ones tried it out. The fireworks display was one of the major attractions because it was a new thing for many people.”

What DSF means to him:
“DSF to me is a very good campaign for tourists — a lot of people are coming to the city, so you won’t get idle at work especially of you’re working in travel sales.”

Biggest discounts he’s had so far
“When I bought an iPhone 4 two years back. I got a discount of Dh250. My very first purchase during DSF was a leather wallet at Dh30, which would probably cost Dh100-Dh150 now.”

Where he was when DSF was launched:
“I’ve been in the UAE for 38 years and I was here in Dubai when they first launched it in Rigga beside the then Dubai Municipality office.”

Fist DSF experience:
“Earlier, the entire celebration was concentrated in one area in Rigga stretching for about two square kilometres. But now, everywhere you look, you see DSF promotions. We would go out to shop four or five times every week because people were really interested in it as it was a new concept.”

What DSF means to him:
“DSF is a time when family members from India travel to Dubai to shop.”

Biggest discounts he’s had so far:
“I got a discount of Dh200 after buying a TV set, that’s the biggest so far. My very first purchase was a sound mixer for Dh125 and I was able to use it for ten years.”

Top shopping tip:
•             “Best thing to buy during DSF are electronics [and] appliances. I bought a discounted washing machine that came with a [free] microwave oven.”

Where he was when DSF was launched:
“I was in Dubai when the first DSF was launched in 1996. The closing day of [the first] DSF will remain unforgettable for me. I still remember the crowded Al Nasr Square streets and rush that was experienced that evening.”

Experience during first DSF:
“The first-of-[its]-kind inaugural event in the region itself was a great success. The activities were concentrated in Deira, Bur Dubai and Satwa. The streets were decorated and evenings were filled with curious residents to experiences the never before shopping bonanza that was going to be there for a long period to come in the history of Dubai and UAE. The lucky draws giving luxurious cars on raffle were a big attraction.

What DSF means to him:
“A festive time where friends and families could meet, do a bit of shopping, eat out and explore the culture and tradition of countries from different parts of the world. DSF has grown its stature to entice many countries to emulate similar events on a yearly basis.”

Top shopping tip:
“DSF now is spread out for a longer time and so wait for the early rush to subside and select offers and items that really fit your purse and requirements.”

Where she was when DSF was launched:
“I was in Abu Dhabi at the launch of DSF. It was a fantastic idea and created a hub for people to meet and shop from all over the world.”

Experience during first DSF:
“The hype of excitement that all the shops were simultaneously on sale making offers, [holding] raffles and hotel discounts. [It was] amazing.”

What DSF means to her:
“DSF is a chance to buy products [that] perhaps I would wait to save up for, but can be considered due to DSF shopping discounts. I have made new friends from socialising on a DSF meet and shop.”

Biggest discounts she’s had so far:
“We bought skis, suitcases, [and] evening dresses from the best brands. The hotels we stayed at were offering half price rooms with breakfast.”


“I think the whole festival runs smoothly as it is, the word is spread around the world, and visitors from all over are keen to experience it. Perhaps the public transport can get involved more with the late-night shopping, i.e., weekly passes exclusive from DSF outlets.”

To read it in original, visit Gulf News online
Posted by ClicksandWrites at 7:00 AM